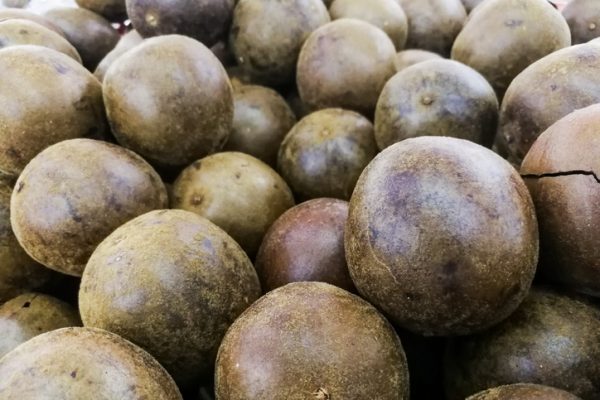 You may have seen an interesting new ingredient on your healthy food products lately and have been wondering exactly what it is. Monk fruit, or lo han guo, is a small green melon from China with a very sweet taste—but zero calories as a sweetener and zero carbs. It also does not raise blood sugar levels. This sweet little secret has been around for decades, but is just now making its way into mainstream foods as a healthy, zero calorie, natural alternative sweetener.

We’ve had a variety of choices for low calorie sweeteners over the years. However, most of them have previously met with negative reviews due to potentially serious health issues.

Consider for example, these low-calorie artificial sweeteners that have been on the market (all approved by the FDA):

All of these have been found to have adverse health effects, negatively affect the gut microbiome, have links to some types of cancers, increase appetite and actually cause weight gain.

Aspartame, or NutraSweet as it is called, has been found to be neurotoxic and the excitatory amino acids in it can cause long term damage to the brain neurons. One of aspartame’s primary ingredients, phenylalanine, blocks the production of serotonin in our gut, which not only negatively affects moods, causing anxiety and depression, but low serotonin also brings on food cravings—especially for sweet, starchy foods. Result is often weight gain.

While sucralose was marketed as a safer artificial sweetener called Splenda, it is a chemically created compound modified by adding chlorine atoms to sugar. This is like ingesting small amounts of chlorinated pesticides. Oh, and by the way, sucralose was discovered in the 1970’s by scientists who were working on creating a new pesticide.

Many people are actually allergic or sensitive to artificial sweeteners and can have reactions ranging from an itching, oozing rash, hives, eczema to nausea, diarrhea, and wheezing.

Artificial sweeteners have been found to disrupt our microbiome in our gut as well, causing a big drop in serotonin production. This can lead to a variety of digestive problems, brain dysfunction and mood disorders including:

Artificial sweeteners also trigger insulin release and increase appetite, defeating the purpose for which they are used in the first place—causing cravings, excessive eating and weight gain.

Stevia, a natural sweetener derived from the stevia plant, has been used for years as a safe and natural alternative to artificial sweeteners. Stevia, however, when used in its more natural form, can have an unpleasant aftertaste that is bitter or metallic tasting. And, some people actually have allergic reactions to stevia. Many of the commercially marketed stevia products are mixed with dextrose, erythritol, and lactose, making them nutritionally much different and iffy as far as being a healthy sweetener.

Enter monk fruit. Monk fruit has traditionally been used in herbal medicine and has a naturally sweet taste. Monk fruit contains something called mogrosides, which are intensely sweet.

Monk fruit sweetener has several health benefits as a natural sweetener. It has zero calories, zero carbohydrates and no harmful side effects–like the FDA-approved artificial sweeteners listed above.

Monk fruit also contains antioxidants and does not raise blood sugar, making it safe for diabetics or weight loss. According to this 2011 study, monk fruit has been safely used in traditional Chinese medicine for many, many years. One of its uses is to relieve sore throats and minimize phlegm in colds and flu.

And since monk fruit has been used for centuries, it is a safe and healthful sweetener. The Food and Drug Administration has determined that monk fruit is “generally recognized as safe (GRAS)” for everyone, including pregnant women and children.

However, outside of traditional Chinese medicine, monk fruit mass is just now beginning to be mass marketed, so more scientific studies will have to be done to determine its overall effects.

The downside of monk fruit includes the fact that monk fruit is difficult to grow and harvest–and it spoils easily–so it is still a fairly expensive product. While it is gaining in popularity, it is still tricky to find monk fruit sweetener at your local grocery or health food store.

Monk fruit does have a little bit of a bitter or strange aftertaste, depending on the food or drink it is included in. Monk fruit sweeteners can be used in coffee, tea, salad dressings, sauces, baked goods, and even as a sweetener in collagen and protein powders.

While monk fruit has zero calories and carbohydrates, be careful because most baked goods, smoothies and other drinks still have plenty of calories on their own, and can fool you into thinking you are not eating any calories.

Monk fruit is a member of the Curcurbitaceae family, which includes pumpkin, cucumbers, squash, and melons. If you are allergic to any of these foods, you may be allergic to monk fruit.

While monk fruit may need further research to study all of its health impacts, it seems to be a great, natural alternative to other artificial sweeteners—and great for anyone who wants to limit sugar in their diet. Especially those with diabetes or following a weight loss diet. While there are a few claims about monk fruit’s ability to prevent cancer or other health problems, more research is needed.

Try this luscious, healthy, frosted monk fruit brownie recipe from our friends at Healthline and thesmartcookieblog.com. You are sure to enjoy every bite!

Speaking of diabetes…If you think that Type 2 Diabetes is irreversible like many misinformed doctors will tell you, then you need to read some of the proof below on how to naturally reverse Type 2 Diabetes…

Although eating “paleo” or even low-carb is a good first step, you’ll also see below other techniques on just how simple it can be to “fix” your diabetes, control your blood sugars, and lose all of that excess fat sitting on your stomach.

> 1 Simple trick to REVERSE your Diabetes, naturally (while getting off drugs ASAP)

Mike Geary has been a Certified Nutrition Specialist and Certified Personal Trainer for over 15 years now. He has been studying nutrition and exercise for almost 25 years, ever since being a young teenager. Mike is originally from Pennsylvania, but has fallen in love with mountain life and now resides in the picturesque mountains of Utah. Mike is an avid adventurist and when he’s not spending his time skiing, mountain biking, hiking, or paddleboarding on the lake, he has enjoyed skydiving, whitewater rafting, piloting an Italian fighter plane (seriously), scuba diving, heli-skiing, and traveling all around the world, enjoying learning about different cultures. At the age of 40, Mike now feels healthier, stronger, and more energetic than when he was 20... All because of a healthy lifestyle and great nutrition!
Previous The Sneaky Stress & Anxiety Symptoms Negatively Affecting Your Life…
Next THIS ‘Off Beat’ Music Has Massive Health Benefits