The problem with spinach (it can be both good AND bad) 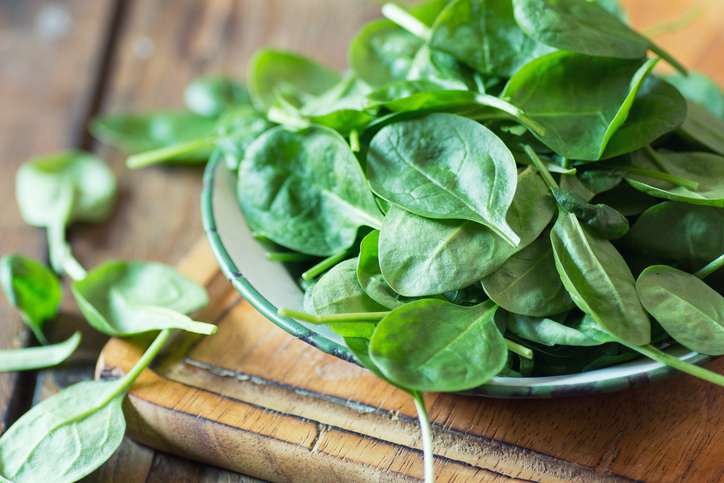 Why Some People Should Avoid Eating Spinach

I may be giving away my age, but when I grew up, Popeye was a popular cartoon hero, and he ate spinach to get strong muscles. We were always urged to “eat your spinach, and be like Popeye”.

Unfortunately, the spinach that was primarily available back then was the nasty, cooked to death kind that came in a can. It wasn’t until my family started growing spinach in our own garden that I learned to love it’s tender, sweet, fresh-picked leaves in a salad or lightly stir fried with lemon and butter. It’s tender texture and mild taste make it a favorite addition to smoothies, soups, and stir-fries. According to the USDA, Americans consume nearly 2½ pounds of spinach per year per capita these days.

Spinach is a nutrient-dense, dark green leafy vegetable, high in niacin, and other B vitamins, vitamins A, C, E, K, packed with calcium, iron, magnesium, phosphorus, potassium, copper, and manganese. Spinach also contains some serious antioxidants that fight free radicals that damage the cells in your body, helping prevent cancer, chronic diseases, aging and other serious health issues. The folate it contains, an essential B vitamin, is especially vital for pregnant women and their fetuses, and also protects your cardiovascular system, paired with magnesium that helps essentially every bodily function, as well as maintaining a healthy blood pressure level. Spinach is also excellent brain food, improving memory and mental clarity.

Spinach comes from the same family as beets and swiss chard. These superfoods are known for reducing inflammation and slowing the aging process, so it’s no wonder spinach seems to be such a superstar!

Also worth noting, spinach contains a type of healthy natural steroid that increases sugar/glucose metabolism and helps maintain healthy blood sugar levels. Obviously this is especially beneficial with people with pre-diabetes or diabetes, since it helps to eliminate the need for insulin.

So yes, spinach does have some very amazing health benefits, but it can also have a few downsides too.

Although spinach contains high levels of iron and calcium, these nutrients are somewhat difficult to absorb from spinach. And even though there is lots of calcium, it is virtually unusable in our bodies, as spinach contains one of the least bioavailable forms of calcium.

This is partly because spinach contains substances that inhibit certain nutrients from being properly absorbed.  Spinach also contains a substance called oxalic acid or oxalates which can bind to calcium and iron in the body and prevent the body from being able to absorb them. Oxalic acid is a natural substance found in several different plant based foods including rhubarb (its leaves contain very high amounts of oxalic acid), chard, and beet greens.

Oxalic acid does bind to some minerals, making them unavailable for the body to absorb. So if you were to eat large quantities of foods containing lots of oxalic acid on a daily basis, you may end up with some nutritional deficiencies over a period of time—but we are talking weeks to months, though, not just a meal or two.

For some people, the high oxalate levels in spinach can also create an increased risk of kidney stones and joint problems.

Oxalates can accumulate in the body, especially the kidneys. When the oxalates combine with calcium, kidney stones can form. Calcium oxalate is responsible for about 80% of kidney stones as a matter of fact. And this is where spinach gets its bad rap.

Oxalates are not recommended for people who have inflammatory diseases including gout, arthritis, and even vulvodynia. These people have a tendency to have a greater uptake of oxalates and calcium. But for most of us, this should not be a problem, as long as you’re not eating spinach every single day.

In fact, gut bacteria, are thought to play an important role in the oxalate absorption, since some types of gut bacteria break down oxalate, especially oxalobacter formigenes, lactobacillus, and bifidobacteria. And other research has shown absorption of oxalates has to do with the combination of foods eaten during a meal. For example, even if your body has difficulty absorbing calcium from spinach, when eaten at the same time as other calcium rich foods, such as milk or cheese, the calcium from other foods is absorbed with no problems.

Cooking spinach was thought to lower the oxalate content, but research shows this does very little to reduce oxalates.

Generally, unhealthy levels of oxalate buildup is an uncommon problem with spinach and other high oxalate foods, so there really is no reason to avoid spinach unless your doctor advises you to, or you have Gout or Arthritis as mentioned above.

Overall, spinach can be a healthy addition to most people’s diets, but just beware not to overdo the quantity so that you’re not getting excessive oxalates on a daily basis.  So go ahead and throw a handful in your smoothies, munch down on a healthy spinach salad for lunch, and maybe even try a creamed spinach with dinner.  But for a lot of people, eating spinach a couple times a week might be better than on a daily basis.

Mike’s notes:  To add onto Catherine’s comments, I will add a little personal experience here too… I discovered about 3 years ago, while I was recovering from an autoimmune Thyroid problem, that my digestive system does NOT like leafy greens, including spinach.

I discovered this accidentally, because I used to eat a salad with almost every dinner on the side.  However, one night I skipped the salad and just ate meat, a sweet potato, and an avocado… The next morning, I had a “perfect” poop, and in fact, it was a MUCH better poop than what was typical for me at the time.  So I did a little experimenting, and sure enough, every time I would add a leafy greens salad back into my nightly dinner, my digestion would suffer a little, and my poop would be loose the next morning.  So I’d remove the salad from my next dinner, and sure enough, I’d have a “perfect” poop again the next morning.

I’ve discovered through this experimentation that for me personally, my digestive system clearly doesn’t like leafy greens, and my digestion is MUCH better when I avoid them.  I’ve tested this dozens of times in the last 3 years, and every single time, I have poor digestion when I eat greens.  So I simply avoid them now all the time, and my digestion is great now, as long as I also avoid other digestive irritants such as beans, which also seem to not agree with me.

And if you think we “need” leafy greens to get all of our nutrition, this is false… I can get ALL the nutrients and antioxidants I need from root vegetables like carrots, beets, sweet potatoes, turnips, as well as fruits, nuts, herbs, spices, and seeds.  There’s nothing “essential” about leafy greens by any means.

By the way, if you were wondering, 3 years ago, I completely healed my autoimmune hyper-thyroid condition in about 6 months with ZERO drugs… I will say that I had to ignore my doctors orders when they diagnosed my Thyroid condition because they wanted to possibly do surgery or put me on thyroid drugs for the rest of my life potentially.

Instead of using harmful pharmaceuticals or surgery for my fairly serious hyperthyroid disorder, I instead attacked the ROOT cause of the problem, which was stress and gut health, and also used herbs to help heal my Thyroid as well.  I did various gut-healing protocols, avoided gut irritants like wheat, beans, and also for me, leafy greens.  And I also started drinking bone broth as a gut healing drink every single day, and it did wonders!  (Interestingly enough, my joints have felt a LOT better since doing daily bone broth too!)

My whole plan worked amazingly well, and my autoimmune hyperthyroid condition was completely gone and back to normal in 6 months, and has never returned in 3 years.  See, you CAN do things the natural way, by getting to the ROOT cause of a health problem instead of just masking the symptoms with side-effect ridden pharmaceuticals.

If you want to read more about similar topics on why you can possibly eat TOO many veggies, read this article.

Mike Geary has been a Certified Nutrition Specialist and Certified Personal Trainer for over 15 years now. He has been studying nutrition and exercise for almost 25 years, ever since being a young teenager. Mike is originally from Pennsylvania, but has fallen in love with mountain life and now resides in the picturesque mountains of Utah. Mike is an avid adventurist and when he’s not spending his time skiing, mountain biking, hiking, or paddleboarding on the lake, he has enjoyed skydiving, whitewater rafting, piloting an Italian fighter plane (seriously), scuba diving, heli-skiing, and traveling all around the world, enjoying learning about different cultures. At the age of 40, Mike now feels healthier, stronger, and more energetic than when he was 20... All because of a healthy lifestyle and great nutrition!
Previous Low Carb Smoked Salmon Stuffed Avocados (Healthy Keto Recipe)
Next This chemical in corn, wheat, oats and soy is WORSE for you than gluten