The Magic of Medicinal Mushrooms 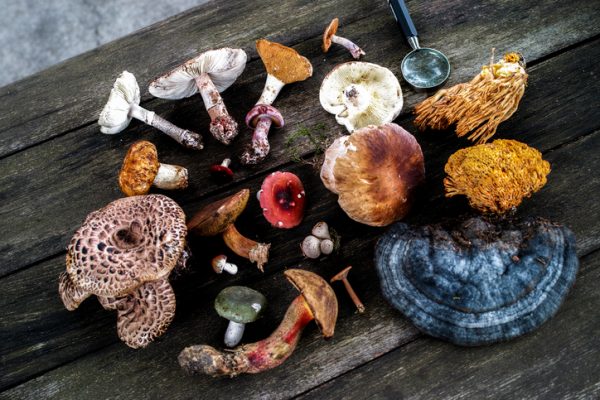 You may be seeing mushrooms as ingredients in everything from kombucha to coffee drinks to protein powders and supplements to healthy snacks lately. Mushrooms are everywhere and they have been discovered as the new ‘superfood’.

Medicinal mushrooms have been used for centuries around the world to fight cancer, enhance or modulate immune response, boost brain power and focus, increase antioxidants, lower blood pressure, help with sleep and relaxation and more. Mushrooms are reported to have antimicrobial, anti-inflammatory, cardiovascular-protective, antidiabetic, liver-protective, and anticancer properties.

While mushrooms are not the richest source of common micronutrients like magnesium, calcium, and vitamins, they are full of harder-to-get nutrients like selenium, copper, and pantothenic acid—as well as having some unique nutrients you can’t get in other foods.

Did you know you can take fresh mushrooms, lay them out in the sun for a couple of hours and they will synthesize more vitamin D? Yes, indeed. Pretty awesome.

The most interesting properties of mushrooms come from the rare and unique compounds that won’t show up in any nutrient database. Many edible mushrooms contain substances that perform with therapeutic, medicinal, or pharmacological-like effects.

While these are often ingredients sold in powdered form, many of these are also showing up in the produce section of your favorite health food store.

Nootropics are a new form of supplementing to increase brain power, focus, mood, memory, and fight dementia. Several varieties of medicinal mushrooms fit in this category, including, chaga, lion’s mane, cordyceps, maitake, and reishi. And what college student or aspiring professional doesn’t want to increase their brain power?

Mushrooms are also known for their powerful immune-enhancing properties. Many medicinal mushrooms not only make the immune system stronger to fight off pathogens, but these mushrooms also help the body destroy cancer cells as well.

Some varieties of mushrooms can help to modulate the immune system in a way that helps the immune system become more balanced. Strong enough to fight off dangerous pathogens and cancer, but calm enough to lower inflammation and auto-immune health issues.

Here’s an in-depth look at some of the most powerful health-enhancing mushrooms:

Shiitakes are one of my favorite mushrooms, aside from their major health benefits. Shiitakes have a delicious, earthy, almost meaty texture, that makes them a beneficial addition to soups, stews, meat, and vegetable dishes. Shiitakes are denser and higher in protein and iron than many other types of mushrooms.

Shiitakes contains an antioxidant called “L-ergothioneine” which specifically protects the cells from oxidative damage. This amazing antioxidant can only be obtained through diet—most notably, shiitakes.

Shiitakes also contain a polysaccharide—a type of special carbohydrate—that has cancer tumor fighting properties along with immune boosting abilities. This substance, lentinan, is very effective for the immune system. In fact, for people who are immune-suppressed or immune-depressed, lentinan provides added protection.

What makes this mushroom stand out, however is the calming properties it contains. Reishi contains a compound called triterpene which is the active ingredient in its mood-boosting abilities.

Reishi is also valuable as a treatment for chronic fatigue syndrome. A study in Thailand treated subjects with reishi mushroom or placebo. At the end of the study those who were using the reishi reported a significant increase in quality of life, compared the placebo group.

Many of the polysaccharides contained in reishi mushroom are associated with immune function, and will help modulate the immune system. It is also known to improve sleep, reduce stress and fatigue.

Lion’s mane is an interesting looking fungus, looking like a big white puffball or even—at first glance—a little like cauliflower.

Do you ever struggle with brain fog? Lion’s mane will help re-establish your mental clarity. This puffball of a mushroom is full of antioxidants and helps immune function, like many other mushrooms.

However, lion’s mane strength comes from the fact that it boosts the production of Nerve Growth Factor and myelin, which is the all-important insulation around your nerves.

NFG and myelin are critical to brain and nerve health. When things go awry, it results in serious neurological diseases including Parkinson’s, Alzheimer’s and MS. Lion’s mane protects from these life-changing illnesses.

Cordyceps has an interesting history. In the wild, cordyceps is a parasitic fungus that grows on a particular type of caterpillar. Cordyceps is now cultivated so it does not have to be grown on caterpillars, although it still retains its amazing medicinal properties.

In addition, cordyceps helps to enhance lactate clearance. Lactate is the substance that builds up in muscles during strenuous exercise and creates that muscle ‘burn’ and fatigue. Cordyceps is also known as an antioxidant and reduces oxidative stress, making it the ideal medicinal mushroom for improved athletic performance and better recovery.

In fact, cordyceps first gained a lot of attention, when, in 1993, Chinese female athletes began breaking world records in distance running. Their performance was attributed to a nutrition regimen that involved cordyceps supplementation.

And yet another study on endurance cyclists found that cordyceps not only improved cycling performance but it also helped prevent overtraining syndrome (OTS), due to the high levels of antioxidants cordyceps contains.

Last but not least, cordyceps helps men increase their testosterone production. Testosterone is necessary for normal sperm development and sex drive. Cordyceps has long been used for the enhancement of sexual function in human beings. Evidence shows that cordyceps can improve reproductive activity, enhance the libido, and restore reproductive function in both men and women. A specific protein found in cordyceps may increase blood flow and help the penis trap blood to improve erections, thereby improving sexual function.

Chaga is not your typical mushroom. It is a fungus that grows on the bark of birch trees in northern Canada, Alaska, Siberia, Northern Europe, and Korea.

Chaga is one of the most potent sources of antioxidants on the planet, so chaga is very efficient at fighting free radicals, stimulating the immune system, protecting the liver, and lowering inflammation. Chaga can also slow aging of the skin, help to lower LDL cholesterol and prevent or slow the growth of cancer.

Studies on chaga in animals show it to help preserve acetylcholine for better brain function, learning and memory. Acetylcholine is a brain chemical which is critical for creating new memories, reasoning, focus, cognition, and growth of new synapses. Lack of acetylcholine can result in diseases like ADD, ADHD and Alzheimer’s. Chaga, lion’s mane and reishi are the top three medicinal mushrooms for better brain health.

Avoid chaga if you take blood thinning medication, diabetes medication or if you have kidney disease. Chaga is higher in oxalates, which may prevent the absorption of some nutrients and can bother those who are sensitive to high oxalate foods.

Turkey Tail mushroom is one of the best-researched medicinal mushrooms. It grows on dead logs all over the world, and gets its name from the brown and tan rings that look like the tail feathers of a turkey. It’s very pretty.

Many of the medicinal mushrooms exhibit strong anticancer properties, probably due to their high levels of powerful antioxidants. But turkey tail takes it a step further.

Turkey tail improves the body’s immune function by stimulating cytokine production, which helps to increase the body’s supply of natural killer cells (part of the innate immune systems—your first line of defense) and other immune-boosting functions.

Turkey tail has also been shown to improve the survival rate of people with particular types of cancer, including gastric cancer. Due to the beneficial compounds it contains, turkey tail is often used with traditional cancer treatments like chemotherapy as a natural way to fight certain cancers.

Turkey tail can also strengthen the immune systems of those cancer patients undergoing chemotherapy, enhancing the ability of chemotherapy to work on cancer cells. Turkey tail contains some of the highest levels of beta-glucans of all mushrooms and keeps our immune systems healthy—especially when turkey tail is taken over extended periods of time.

The maitake mushroom is native to northeastern Japan. Its name is derived from the Japanese words for dancing mushroom. Another legend says it was named after people dancing with happiness upon finding it because of its incredible healing properties.

This mushroom, like many mushrooms, is a type of adaptogen. Adaptogens help the body with physical and mental stresses. They also work to help balance any unbalanced systems in the body.

It’s primary value as a nootropic (brain boosting chemical) comes from its ability to help relieve depression. Studies with animals show that supplementing with maitake helps alleviate depression by sensitizing certain receptors in the brain.

If you plan to eat the mushroom as a food (and many of these are delicious to eat), be sure to cook them. Raw mushrooms are difficult to digest or metabolize. And many mushrooms are slightly toxic when raw.

The best way to cook most any mushroom is to sauté them in butter or olive oil with some garlic. Add sea salt and cracked black pepper and serve alongside a juicy, grass-fed steak and you will be in heaven.

Dried mushrooms—especially from an Asian grocery store—are far less expensive and work great added to soups and steps or sauces.

Mike Geary has been a Certified Nutrition Specialist and Certified Personal Trainer for over 15 years now. He has been studying nutrition and exercise for almost 25 years, ever since being a young teenager. Mike is originally from Pennsylvania, but has fallen in love with mountain life and now resides in the picturesque mountains of Utah. Mike is an avid adventurist and when he’s not spending his time skiing, mountain biking, hiking, or paddleboarding on the lake, he has enjoyed skydiving, whitewater rafting, piloting an Italian fighter plane (seriously), scuba diving, heli-skiing, and traveling all around the world, enjoying learning about different cultures. At the age of 40, Mike now feels healthier, stronger, and more energetic than when he was 20... All because of a healthy lifestyle and great nutrition!
Previous 6 Powerful Benefits of Zinc: Your Immune System, Hormones, Brain Function, and so much more
Next What is Dragon Fruit and Should I Eat It?