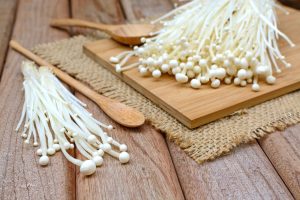 Mushrooms—often overlooked as a boring filler for dishes or a nice addition to your stirfry. Mushrooms have some amazing attributes, however. We’ve been conditioned to eat the brightly colored foods that are full of antioxidants, vitamins and minerals, while mushrooms often tend to get overlooked as a health food, as they are often pale, tan, white or grayish. The most common mushroom is the ubiquitous white button mushroom, but there are many more exotic mushrooms that contain some amazing potentially life-saving health benefits.

Enoki mushrooms generally show up in the produce section as bunches of long, slender white mushrooms with a small cap. The delicate little mushrooms you see in the store differ from ones grown in the wild which are brown or golden and have a thicker, shorter stalk.

Enokis have a mild flavor that mixes well with many dishes. Enokis, also called Enokitake, are favorites in dishes from Japan, Korea, and China. They have a mild, slightly fruity taste and crispy texture, and work well in soups, sushi, and salads.

These petite mushrooms have been prized in Chinese and Japanese diets as well as being utilized into their traditional medicine as a tonic to fight liver disease, cholesterol, digestive disorders, blood pressure and cancer.

Enokis have been singled out as one of the best food weapons in the battle against cancer. And for good reason. Dr. Tetsuro Ikekawa, an epidemiologist from the Research Institute of the National Cancer Center in Tokoyo, Japan discovered this phenomenon while observing Enoki farmers.

In the Nagano province of Japan, the cancer rates were extremely low, especially in comparison to the surrounding areas. This area happened to also be the center for the cultivation of Enoki mushrooms, and the Enoki mushroom growers and their families seemed to be reaping the benefits of this mushroom with excellent health and extremely low rates of cancer. It seems that the bruised and blemished mushrooms that were not ‘pretty’ enough to sell, were sent home to the families of the mushroom farm workers. So, the mushroom farmers and their families were eating large amounts of these mushrooms. Dr. Ikekawa surmised that the mushrooms were drastically lowering the rates of cancer and cancer deaths.

Dr. Ikekawa’s amazing study is detailed in this 1969 article that was published in Cancer Research, sparked more research into the cancer-fighting substances in mushrooms, especially the Enoki mushroom. Two new compounds were isolated and identified, flammulin and proflamin. These two compounds showed better cancer-fighting activity against many cancers than previously studied substances found in mushrooms.

Chinese researchers found that three unique beta glucans found in Enoki mushrooms (beta-linked glucose, galactose, mannose and fucose sugars) induced a significant increase in cellular nitric oxide expression by the immune cells, which is one of the key mechanisms that our bodies use to destroy diseased cells. Enhancement of these types of immune responses is often seen with many medicinal mushrooms that have been tested by various cancer researchers.

Besides the amazing cancer fighting and tumor shrinking properties these delicious mushrooms possess, they also contain very few calories (15 calories in a cup), a small amount of protein and very little carbohydrate.  They are rich in B vitamins—folate, thiamine, pantothenic acid and niacin, which help with energy production, and healthy nerve and brain function. Mushrooms are also one of the few foods rich in vitamin D, cancer-fighting selenium, copper, iron, phosphorus and potassium.

Mushrooms contain another major health-protecting ingredient called beta-glucans. Extensive studies on beta-glucans shows this nutrient is a critical weapon for the immune system. Beta-glucans also work as an immunomodulator, meaning that they actually help to regulate the immune system, making it stronger, but also helpful to overly active immune systems as well. Beta-glucans activate the macrophages in the body, the little ‘Pac-men’ that devour invading pathogens and harmful organisms, along with stimulating the white blood cells that destroy tumors and viruses.

Recently, beta-glucans have been the subject of scientific studies that show they improve insulin resistance and blood cholesterol levels, making them a new potential treatment for diabetes and associated heart disease. Beta-glucans also help to reduce hypertension and promote wound healing as well.

Enokis can be found growing wild or cultivated. They look vastly different depending on how they were raised. The Enoki mushrooms you see in the store generally are cultivated and grown in jars, where they grow long and slender with small caps. They are white or creamy colored and grown in a dense clump. The wild Enoki is grown on a stump of a Hackbery tree, and are golden to dark brown, with thicker, shorter stems and larger caps.

Look for tender, firm Enoki mushrooms in the store. They do not have a long shelf life, so it’s best to use them immediately. Throw raw ones into your salad, or roll up into spring rolls or sushi rolls. Add to your stir fries, omelets, risottos, or curries. They are delicious stirred into a soup or used as a garnish. If cooking, cook them lightly as they can get tough or soggy quickly. Their flavor and texture work well with most any Thai, Japanese, Vietnamese or Chinese dishes.

Enoki mushrooms, and other mushrooms with medicinal value, deserve much more research to fully understand how consumption helps to decrease cancerous tumors, as well as significantly decreasing death rates from cancer. Dr. Ikekawa’s important study and contribution of epidemiological data, and the isolation of immune-modulating molecules, have shown us that these mushrooms have an amazing power to help keep us healthy.

Maitake, Shiitake, Oyster, Cordyceps, Reishi, Lions Mane, Turkey Tail and Chaga, along with the very ordinary white button mushroom all have immune-boosting, cancer-fighting, tumor-shrinking abilities—some with the ability to shrink tumors by 70%!  Make no mistake about it, mushrooms deserve your attention. So, start incorporating these incredible health-protectors into your diet today!

If you enjoy eating healthy foods that add value to the quality of your life such as mushrooms and all the other wonderful tasting foods that we write about on this blog you are going to LOVE our diabetic-friendly nutritional guide- Click on the following link so you can learn more about this and discover the 1 Simple trick to REVERSE your type 2 Diabetes (This also helps get rid of stubborn belly fat too!)

You can also read our blog about the powerful health benefits of shiitake mushrooms here.

Mike Geary has been a Certified Nutrition Specialist and Certified Personal Trainer for over 15 years now. He has been studying nutrition and exercise for almost 25 years, ever since being a young teenager. Mike is originally from Pennsylvania, but has fallen in love with mountain life and now resides in the picturesque mountains of Utah. Mike is an avid adventurist and when he’s not spending his time skiing, mountain biking, hiking, or paddleboarding on the lake, he has enjoyed skydiving, whitewater rafting, piloting an Italian fighter plane (seriously), scuba diving, heli-skiing, and traveling all around the world, enjoying learning about different cultures. At the age of 40, Mike now feels healthier, stronger, and more energetic than when he was 20... All because of a healthy lifestyle and great nutrition!
Previous Coconut Flour vs Almond Flour vs Hemp Flour vs Green Banana Flour vs Buckwheat Flour (and more)
Next The Truth About Apple Cider Vinegar