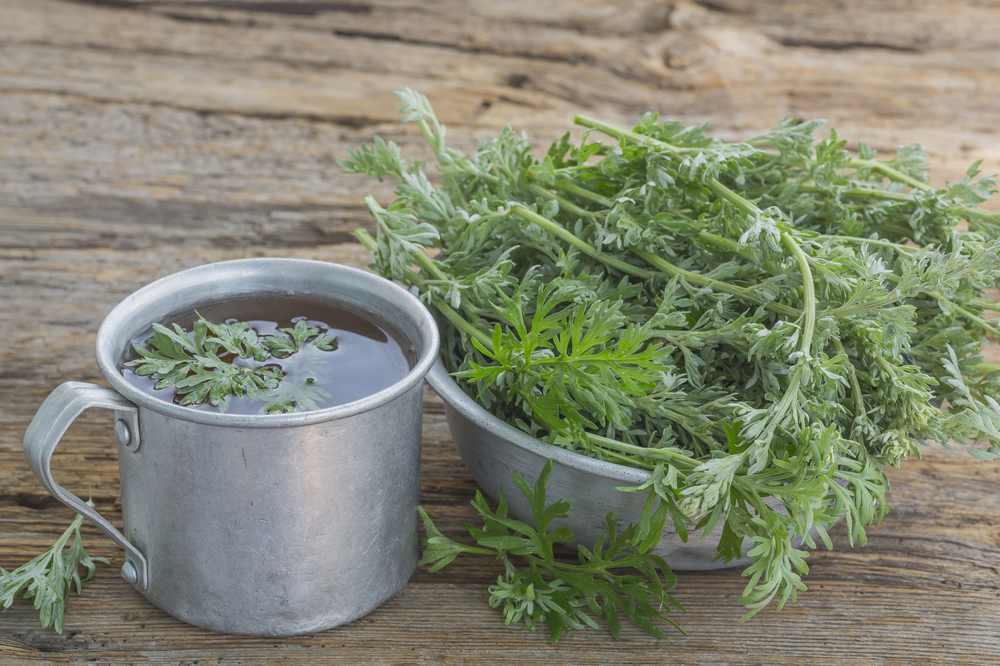 Wormwood. To those who are unfamiliar with this herb, it doesn’t conjure up a pretty picture does it? Either you think of some of rotting hunk of wood full of worms, or you just get the heebie-jeebies from anything you might put in your body with the word “worm” attached to it. However, wormwood is a valued herb, and you may find it to be one of your biggest allies, especially if you travel or have been exposed to parasites—and like it or not, most all of us have been exposed to parasites, at one point or another.

A parasite is a general term for any organism that can live off another living organism. Parasites can be anything from pin worms or tapeworms, to something so small it takes a microscope to view, like any type of fungal infection, protozoa or amoeba. So even things like food poisoning can often result in an intestinal parasite taking up residence in your body. And, if you’ve ever traveled (especially to Latin American or South America), you may have had to deal with a bout of ‘intestinal distress’ which is often caused from a giardia infection—a protozoan parasite that often gets into water and food supplies. Giardia is actually very common in the United States as well, especially in our rivers and streams.  Other common parasites can come from undercooked meat, sushi, soil or unclean water, and even spread from person to person. If you’ve ever had food poisoning, you know what parasites are.

General symptoms of a parasitic infection often include fever, aches, nausea, fatigue, stomach pains, bloating, and diarrhea. While our bodies can sometimes fight off an intestinal parasitic infection, it can take up to 6-8 weeks of being entirely miserable, and never straying far from the bathroom. And some can take up residence in our bodies indefinitely! Conventional medicine has several medications for different types of parasitic infections that often include some type of antibiotic, which also kill off all the helpful, protective bacteria in our guts.

How Can Wormwood Help?

Wormwood, or Artemisia absinthium as it is officially called, is of the same plant family as daisies and ragweed. Wormwood is an herb that has been around since Biblical times, and is best known as the primary ingredient in Absinthe, an alcoholic beverage. Absinthe was outlawed for many years in the U.S. because it is considered toxic, addictive, and can cause hallucinations, but wormwood is still allowed as an herbal supplement. Wormwood contains a volatile chemical compound called, “thujone” which is concentrated in the alcoholic liquor, absinthe, and is responsible for the toxic reactions to it. When using wormwood for therapeutic uses, it contains little if any, thujone, so is not toxic, but only take as directed, and in smaller doses.

Wormwood, as it is aptly named, is extremely effective for intestinal parasites. It works especially well on intestinal worms like the common pinworm and roundworms. Pinworms are a very common infection, especially in small children (but check with your physician before giving wormwood to children). Wormwood also works well to eliminate bacterial infections such as E.coli, salmonella, and even fungi like candida albicans. Wormwood often comes in combination with black walnut, and clove extract, which all work together to be highly effective against all parts of the parasite life cycle. Since wormwood is so effective at killing pathogenic bacteria such as salmonella, E.coli, as well as parasitic organisms such as giardia, it is no surprise that wormwood is an effective treatment for SIBO, or small intestine bacterial overgrowth as well.

Malaria is a very serious disease also caused by a parasite that gets into our bloodstream from the bite of an infected mosquito. People who contract malaria from a mosquito bite can be seriously ill.  And unfortunately, anti-malarial drugs have a lot of side effects, both on the preventative side and the therapeutic side.

Artemisinin is one of the extracts that is taken from the Artemesia or wormwood plant that is highly effective against malaria. This substance is known as one of the most powerful antimalarials there is. It is even acknowledged by the World Health Organization as being a powerful antimalarial for P.falciparum malaria, and recommends it as a first line of defense.

Wormwood’s active ingredient, Artemisinin, has also been shown in studies to actually be effective on certain types of cancer, including breast cancer and prostate cancer. Artemesinin works in a similar way with cancer cells and iron. Cancer cells often feed on iron present in the body, and the greater the iron content, the more Artemesisin interacts with the cell to kill it.

Wormwood is also highly effective at decreasing the inflammation and discomfort associated with Crohn’s disease, to the point where the patients did not need to take their normal dosage of steroids. Researchers also found a steady improvement in symptoms and 65% went into complete remission over the placebo group. Wormwood also showed to have positive effects on mood and quality of life, and none of the side effects of steroids.

Wormwood is also valuable as relaxation agent as a calming agent and to promote restful sleep. It also reduces inflammation, swelling, and pain, as well as being extremely useful for autoimmune disease. It also functions as a highly effective antibacterial agent, for internal intestinal issues, as well as external wounds, ulcers, and rashes. And unlike conventional antibiotic agents and medications, bacteria and parasites do not usually develop resistance to this powerful natural healing substance.

Wormwood is generally found fresh or dried, essential oil, tablets, and capsules from most health food stores. It can also be used in fresh or dry form to make an infusion or tea. It’s best in its dried form as it contains very little of the toxic substance, thujone. Wormwood tea is especially help for digestion and bloating. You can also make a homemade bitters recipe, like this one. Wormwood is often found in combinations with black walnut extract and cloves as a parasitic cleansing agent. To rid oneself of parasites, its best in a pill or capsule form.

Since wormwood is a relative of the daisy and ragweed family, caution if you are allergic or sensitive to ragweed pollen—you may be sensitive to wormwood as well. Wormwood should be taken under the supervision of a professional, and not taken for more than four weeks at a time. It is not meant for long term usage. Do not take if pregnant or nursing, or if you have epilepsy or seizures. And avoid using it as an essential oil in aromatherapy as it contains high amounts of the toxic ingredient thujone which can act as a neurotoxin.

Mike Geary has been a Certified Nutrition Specialist and Certified Personal Trainer for over 15 years now. He has been studying nutrition and exercise for almost 25 years, ever since being a young teenager. Mike is originally from Pennsylvania, but has fallen in love with mountain life and now resides in the picturesque mountains of Utah. Mike is an avid adventurist and when he’s not spending his time skiing, mountain biking, hiking, or paddleboarding on the lake, he has enjoyed skydiving, whitewater rafting, piloting an Italian fighter plane (seriously), scuba diving, heli-skiing, and traveling all around the world, enjoying learning about different cultures. At the age of 40, Mike now feels healthier, stronger, and more energetic than when he was 20... All because of a healthy lifestyle and great nutrition!
Previous Real Milk vs Almond Milk vs Soy Milk vs Coconut Milk (and others)
Next The REAL truth about coconut oil – Don’t believe the propaganda