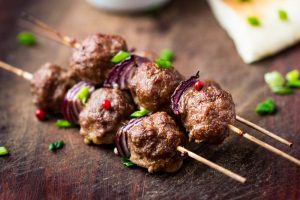 One of my absolute favorite dinners—it’s delicious anytime!

The marinade for this yummy recipe really adds not only a ton of flavor, but a ton of nutrition as well. It is full of curry powder which contains turmeric, the super powerful anti-inflammatory spice that we have become so familiar with. It’s rich in antioxidants that battle inflammation, prevent Alzheimer’s disease, burn fat, and enhance the immune system. It also helps safeguard against those dangerous chemicals that can come from grilling meat, and exogenous AGE’s that form.

Pile on that yummy cilantro pesto sauce when you serve it! Not only does it taste amazing, but, the health benefits associated with cilantro are pretty extensive. It is also known for its anti-inflammatory compounds and its cholesterol-lowering ability, as well as its ability to remove toxic metals (like mercury and lead) from the body. Cilantro is more than twice as effective as antibiotics against the food-borne salmonella bacteria that cause food poisoning.

Cilantro is a powerful weapon to use in fighting diabetes, along with a low-glycemic diet. In fact, cilantro is so effective at lowering blood sugar, it is known in some places as the “anti-diabetic plant.”

The grass fed beef will give you the full benefit of the plenty of healthy omega 3 and CLA fats in the meat without all the hormones, additives, and antibiotics of conventional meat.

Place the cilantro, onion, garlic, chili, ginger, and salt with 3 Tbsp of the extra virgin olive oil in a food processor fitted with a metal blade. Process until a paste is formed. Transfer to a large bowl.

Put 2 Tbsp of the paste in a small bowl and stir in the lime juice to make the cilantro sauce. Cover and set aside. Stir the curry powder into the rest of the paste, add the steak and coat well. Cover and marinate at room temp for about 20 min.

Cut the red onion into wedges, separate the wedges and thread beef and onion onto skewers. Brush a grill pan with the oil. Preheat grill.  Grill the kebabs for 8-10 minutes turning the skewers every 2 minutes.

You should also know that this recipe is an almost perfect low-glycemic snack for Diabetics, due to it’s blend of fiber, healthy fats, antioxidants, and a reasonably low amount of sugars and carbs that impact blood sugar.  Speaking of Diabetes, make sure to read this page next:

1 Simple trick to REVERSE your Diabetes (hint: it’s NOT cinnamon or any supplement)

Mike Geary has been a Certified Nutrition Specialist and Certified Personal Trainer for over 15 years now. He has been studying nutrition and exercise for almost 25 years, ever since being a young teenager. Mike is originally from Pennsylvania, but has fallen in love with mountain life and now resides in the picturesque mountains of Utah. Mike is an avid adventurist and when he’s not spending his time skiing, mountain biking, hiking, or paddleboarding on the lake, he has enjoyed skydiving, whitewater rafting, piloting an Italian fighter plane (seriously), scuba diving, heli-skiing, and traveling all around the world, enjoying learning about different cultures. At the age of 40, Mike now feels healthier, stronger, and more energetic than when he was 20... All because of a healthy lifestyle and great nutrition!
Previous Almond and Avocado ‘Ice Cream’ (Rich, creamy, delicious and can be Paleo and/or Keto)
Next Detox Green Smoothie (Use when you want to feel light & lean)