Is Your Coffee Maker Toxic? 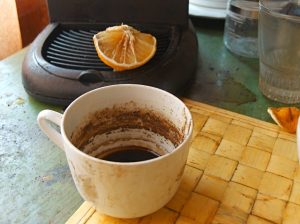 She had two kids, a house in the suburbs and a great job.

But at one point in her late 30s, she began to have a serious problem.

Everyday at work, she was getting hot flashes. She’d be in a meeting with her boss (she was aiming for a promotion so these meetings mattered) and all she’d be able to think about, was getting to the bathroom so she could cool down.

But that wasn’t the only problem.

She was beginning to suffer from a lot of fatigue. Amanda would get home from work, and hardly have the energy to play with her children.

And to make things worse, red bumps were breaking out all over her skin.

In short, she was miserable. But what was the cause?

Can Your Coffee Maker Really Make You Sick?

After a few weeks of this, Amanda went to see her doctor.

Initially, her doctor thought it might be an early menopause – which was a scary thought because Amanda was much too young for that.

Amanda had a great doctor who tested for a lot of different issues including common food sensitivities, potentially low vitamin D level, uterine fibroids, even a potential autoimmune disease!

The doctor even had to request Amanda to start on an immediate elimination diet (in which you avoid wheat, dairy, soy, citrus, and eggs) before things got worse.

Amanda committed fully to the doctors orders, but still nothing was working.

Until she remembered something.

The red bumps on her skin had started right after a new employee at her office brought in an old, plastic coffee maker.

Amanda started thinking to herself, “Could the coffee maker be making me sick”?

Amanda stopped drinking the company coffee, and instead brought her own from home.

After three days, she was like a different person.

After five days, her symptoms were all gone.

In other words, Amanda’s mysterious illness, which had been puzzling doctors for WEEKS…

My name is Mike Geary, aka The Nutrition Watchdog…

… And today, I’m answering the question: “Is your coffee maker toxic”.

It’s a question I get a lot, and unfortunately, for most of you using old-school coffee maker’s, the answer is “Yes, your coffee maker is toxic”.

While that may sound depressing, it’s actually good news. Because there are plenty of options.

I’ll show you a few of those in a second. First, I want to take a closer look and show you exactly what’s wrong with your current coffee maker, and how you can fix it.

And we start with…

The biggest toxin, and the most likely cause of Amanda’s illness is plastics seeping out of your coffee maker and into your drink.

The biggest culprit is a plastic called “BPA”.

To give you an idea of how dangerous BPA is,

● It’s BANNED in Canada and Denmark
● The FDA banned it from being used in baby bottles and sippy cups
● And there are strict laws about how much BPA can be used in consumer products.

But this is just the beginning. You see…

There is significant research showing that even small amounts of BPA in your system can lead to weight gain and obesity (Here are the links to the studies if you’re curious 7, 8, 9, 10).

You have to ask yourself, is this really something you want in your coffee?

Here is how BPA Makes You Fat, Sick and Depressed:

When BPA enters your system, your body reacts to it like you’ve had an estrogen injection.

As soon as it enters your bloodstream, your estrogen receptors are activated.

So the question you may be asking is,

How Does BPA Get Into My Coffee?

Chemisist first started working with putting BPA into plastics back in the 1950s.

They did this to make plastic stronger and more resilient..

For big business, this meant that their products would last longer…

But back then, they hadn’t cared to find out how this would affect us..

..and they still don’t

During the whole water cycle in your coffee machine, all the water is pumping through BPA filled plastic…

This wears away the plastic and the The BPA chemical gets dissolved.

This is how it is going straight into every one of your fresh cups of coffee.

As mentioned earlier, BPA is so dangerous that Canada and Denmark have banned it from consumer products.

Get a coffee maker without BPA, and ideally without any plastic whatsoever.

I’ll show you the coffee makers I recommend in just a moment (don’t worry, they’re less than $50).

But before I do, I want to show you the other big toxic found in coffee makers. And that is…

In 2011, a groundbreaking study called the “NSF International Household Germ Study” was conducted by the Public Health & Safety Organization.

They went into volunteer’s homes, swabbed the entire house looking for bacteria, fungus and mold, and the results were astonishing.

While you would assume that your bathroom is the most bacteria ridden part of your home.

When the truth is, your kitchen is the biggest breeding ground for bacteria.

You have heard about this before. Here’s what new:

The researchers took an in-depth look at coffee makers, and the results were revolting. They found:

● About half of all coffee machines tested had mold and germs growing in their water tanks.
● About one in ten coffee machines were home to coliform bacteria which is usually found in sewage and feces!
● And, on average, your coffee maker has a significantly higher germ count than your toilet seat.

But this is just the beginning of the research.

Another study, this time a 2015 study from Pittsburgh, Pennsylvania, took a look at the water tank, coffee pod compartment, spouts and trays of 28 coffee machines.

Then sent the swabs to a microbiological laboratory for testing.

Unbelievably, they found over 4.6 MILLION colonies of bacteria on these coffee maker machines.

And half of the machines included harmful bacteria and mold such as:

● E.coli (which can cause severe abdominal cramps, diarrhea and vomiting),
● Staphylococcus (which causes staph infections)
● Streptococcus (also known as strep throat and is highly contagious)
● Pseudomonas Aeruginosa (which can escalate to pneumonia, UTI’s and bacteremia)

Now, you may be wondering…

“Why Is There So Much Bacteria In My Coffee Maker?”

The answer is really simple.

Your coffee maker is wet, dark, warm, made of plastic and never cleaned.

In other words, the perfect breeding ground for bacteria, fungus and mold.

It’s really easy to solve this problem. You simply need a coffee maker that can go in your dishwasher.

Unfortunately, this can be harder than it sounds. Most coffee maker’s are designed for aesthetic and aren’t dishwasher-friendly.

You need a machine which you can disassemble in seconds, quickly scrub and set out to dry in the light.

In other words, a coffee maker which is super easy to keep clean.

Well, right now, I’d like to show you two of my favorite coffee makers which do exactly this AND are BPA and plastic free.

For The Person Who Loves Espresso Or Strong Coffee

If you love espresso shots or strong coffee, this classic Italian roaster is for you.

This machine has a very unique process.

First, you put the coffee grinds inside of a chamber in the center chamber and put water in the bottom chamber.

Then, put it on top of your stove and crank up the heat.

As it begins to heat up the water becomes pressurized. The water then is pushed through a tube and passes through the coffee grinds. Then your delicious coffee is pumped through into the top chamber.

Then, your coffee is ready to pour and all that’s left is to enjoy your coffee!

This classic design was first created in Italy in 1933 and has been modified in order to work on electric, gas and even ceramic stoves.

But be careful even though there are many of these now made they are not are created equal.

Warning: Many stove top moka coffee makers are made with cheap aluminum which have been linked to causing several forms of cancer.

The good news is there is a quality machine that retails for less than $40 on amazon.

They make a few different sizes, so you can make a single espresso shot, a full 1-2 (American sized) cups of coffee. Or if you like to drink more than 8 ounces of coffee you can grab the larger unit for a few bucks more.

With this sleek and simple design we’re getting right down to the basics.

As you see: No tubes. No filter. Nonsense.

Just put the coffee on top, and pour hot water over it. And Done!

Yes, you sacrifice a little bit of convenience. Buy a cheap electric kettle will solve that problem in an instant.

And since you won’t have all that harmful plastic, it’s a very worthwhile tradeoff.

This coffee maker also has a stainless steel mesh filter.

It’s much more effective than standard bleached paper filters found in automatic drip machines, which do nothing but rob you of the natural and healthy antioxidant oils found in coffee.

If you are interested in natural ways to transform your kitchen so that your body will easily and effortlessly burn more fat, you should check out our world famous manual The Fat Burning Kitchen. In this manual we uncover the many hidden toxins lurking in your kitchen that have been preventing you from getting healthy. Plus we will show you our 24 hour diet trick that will allow you to transform your body into a fat burning machine.

Mike Geary has been a Certified Nutrition Specialist and Certified Personal Trainer for over 15 years now. He has been studying nutrition and exercise for almost 25 years, ever since being a young teenager. Mike is originally from Pennsylvania, but has fallen in love with mountain life and now resides in the picturesque mountains of Utah. Mike is an avid adventurist and when he’s not spending his time skiing, mountain biking, hiking, or paddleboarding on the lake, he has enjoyed skydiving, whitewater rafting, piloting an Italian fighter plane (seriously), scuba diving, heli-skiing, and traveling all around the world, enjoying learning about different cultures. At the age of 40, Mike now feels healthier, stronger, and more energetic than when he was 20... All because of a healthy lifestyle and great nutrition!
Previous Chicken vs Beef: Which is Healthier & Better for the Environment? (Surprising Answer)
Next Grass Fed Meat vs Vegan Foods (Are vegans harming the environment MORE than grass-fed meat eaters?)