The Good and BAD side of Turmeric 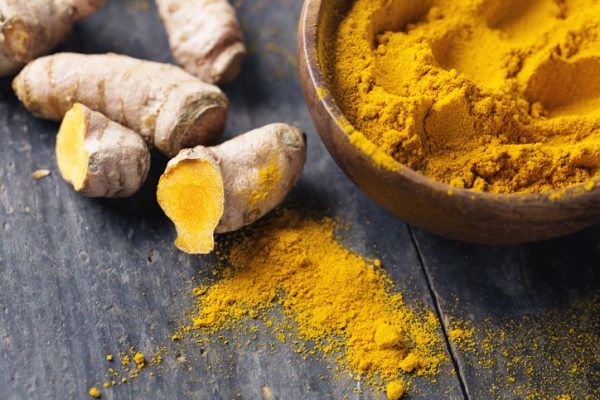 Heard enough about turmeric lately? This superfood has been considered to help Alzheimer’s, arthritis, inflammation of all kinds, fatigue, anxiety, depression, allergies, menstrual problems, diabetes, cancer and more. In short, turmeric has been touted as a superfood, cure-all.

But is this really true?

First of all, I want to point out that turmeric, (the spice) and curcumin are not the same thing. While the two words often get used interchangeably, they are not one and the same. Curcumin is the active ingredient in the spice or the root called turmeric.

Most of the studies done on the health effects have been conducted on curcumin, the active ingredient. The thing is, you don’t get a lot of curcumin in turmeric. In fact, turmeric contains roughly only about 3% curcumin, and when it is absorbed in the body, you may only get about a quarter of that 3%. So, you see, you aren’t getting a lot of this active ingredient by eating turmeric. And when you buy the dried spice, the potency may vary even more depending on its source, freshness, etc.

As Robin Berzin MD, explains, for an anti-inflammatory effect, you will need to get 500 to 1,000 milligrams of curcumin per day.

While 500 milligrams of curcumin a day is a good wellness dose for lowering inflammation, if you’re experiencing chronic pain, or fighting a chronic illness, you might want to quadruple that amount of curcumin—so that comes out to 2000 milligrams, right?

In this study, the curcumin used was equivalent to about 180 milligrams of bioavailable curcumin per day for the study subjects.

Take a look at that spice bottle of turmeric you have in your cupboard. When I look at mine from Whole Foods, it says it contains 47 grams of turmeric. If you do the math, then this big bottle of turmeric only contains about 1.4 grams (3%) or 1400 milligrams of curcumin. If I were to get the recommended amount of curcumin to get the health benefits from it, I’d have to use about almost a jar a day of turmeric, and if I wanted to get into therapeutic dosages of 2,000 mg of curcumin a day, that’s two bottles of turmeric—a day.

That’s a whole lot of curry and turmeric tea!

The bottom line is that if you are talking about health benefits in the spice turmeric, it is negligible unless you are taking large, large quantities of turmeric, and that can have negative side effects. The better solution is to take curcumin extract or supplements—which is what has been used in most studies on the health effects of turmeric.

What about curcumin—is it valuable for your health?

Curcumin extract or supplements from turmeric have been shown to be very effective for overall inflammation, hay fever, depression (which is thought to be brought on by inflammation, among other things), Alzheimer’s, anxiety, heart disease, lowering cholesterol, psoriasis, lowering blood sugar, joint pain from rheumatoid arthritis, irritable bowel syndrome, Crohn’s disease, and cancer.

Curcumin can be valuable for most any health issue related to inflammation in the body. If you do suffer from inflammation, you can start your day off with this turmeric & lemon morning elixir. An interesting way to get a couple more superfoods into your daily diet, and fight inflammation in your body…

Let’s take a look at a few of the most common negative symptoms associated with this super spice ingredient.

Turmeric has the ability to thin the blood which is helpful for those at risk for heart disease and strokes and blood clots. However, blood thinning drugs, combined with turmeric could create a risk of excessive bleeding, so it’s best to consult with your doctor before taking any turmeric or curcumin supplements.

Turmeric can also be dangerous before, during and after surgery by causing excessive bleeding. Be sure to avoid turmeric at least 2 weeks prior to surgery.

2. Not Advisable for Pregnancy

While you don’t have to give up yummy curries if you are pregnant, you do want to avoid any turmeric or curcumin supplements. During pregnancy and breast-feeding, turmeric is usually safe when eaten in small amounts as a spice in food.

Do not take turmeric or curcumin supplements if you are pregnant as this may stimulate premature contractions. There is not enough information to rate the safety of supplemental amounts of turmeric during breast-feeding either. It is best not to use it.

While turmeric can be helpful to those with stomach issues, it is not good to take it if you have issues with GERD (gastro-esophageal reflux disease). Turmeric can increase the secretion of stomach acid, causing indigestion, stomach upset and heartburn. Be wary and if you have any type of stomach issues, and go easy on the turmeric. Some people also report feeling dizzy, nauseas, or have diarrhea from turmeric.

Turmeric can also worsen gallbladder symptoms if you have gallstones or a bile duct obstruction.

4. Other Adverse Effects of Turmeric/Curcumin

Blood Sugar-Curcumin is known to decrease blood sugar. However, if you have any blood sugar irregularities such as hypoglycemia, or diabetes or pre-diabetes, be aware that turmeric and curcumin may make blood sugar too low—especially in combination with glucose-lowering medications.

Hormone Sensitive Cancers-Any cancers that are sensitive to estrogen can be affected negatively by turmeric as well. Curcumin can mimic estrogen in the body, possibly making hormone sensitive cancers worse. Other research shows that turmeric could possibly reduce the effects of estrogen in some cancers, so as you can see the jury is still out. Best to avoid if you have any issues related to hormones.

Fertility Problems-Men taking turmeric could find that it decreases sperm count and slows sperm motility as well, which can reduce fertility. If you and your partner are trying to get pregnant, avoid turmeric and curcumin.

Iron absorption-Turmeric can affect iron absorption, so beware if you have a tendency to develop anemia, or are on a vegan diet.

Adding turmeric to your dishes is a good way to boost the antioxidant, and inflammatory power of your health foods and does have some small health benefits. Just keep in mind that turmeric is not a miracle spice and it contains a very small amount of the active ingredient curcumin.

You can take turmeric supplements in order to get the full health benefits. There are no official guidelines set for turmeric, but most studies show that 500-2000 mg per day of turmeric are effective.

Don’t forget to look for supplements that include piperine, the active ingredient from black pepper that helps curcumin be absorbed in the body better. Remember that it is best to start with a lower dosage and increase gradually to determine your tolerance (some people just cannot tolerate turmeric) and reduce the risk of side effects.

And keep in mind, if you have any other health conditions or concerns, it is important to talk with your doctor before starting supplementation.

Turmeric can have a powerful positive impact on your health and has number of side effects—both good and bad. While it can have positive effects on cholesterol levels, blood sugar, and inflammation, taking large quantities can cause stomach and digestive issues and is not recommended for women who are pregnant or anyone taking anticoagulants.

Mike Geary has been a Certified Nutrition Specialist and Certified Personal Trainer for over 15 years now. He has been studying nutrition and exercise for almost 25 years, ever since being a young teenager. Mike is originally from Pennsylvania, but has fallen in love with mountain life and now resides in the picturesque mountains of Utah. Mike is an avid adventurist and when he’s not spending his time skiing, mountain biking, hiking, or paddleboarding on the lake, he has enjoyed skydiving, whitewater rafting, piloting an Italian fighter plane (seriously), scuba diving, heli-skiing, and traveling all around the world, enjoying learning about different cultures. At the age of 40, Mike now feels healthier, stronger, and more energetic than when he was 20... All because of a healthy lifestyle and great nutrition!
Previous Seven Things That Can Keep You Up at Night and Natural Remedies to Sleep Better
Next Sweet Potatoes vs. Yams vs. White Potatoes