The Truth about Watermelons…and Benefits 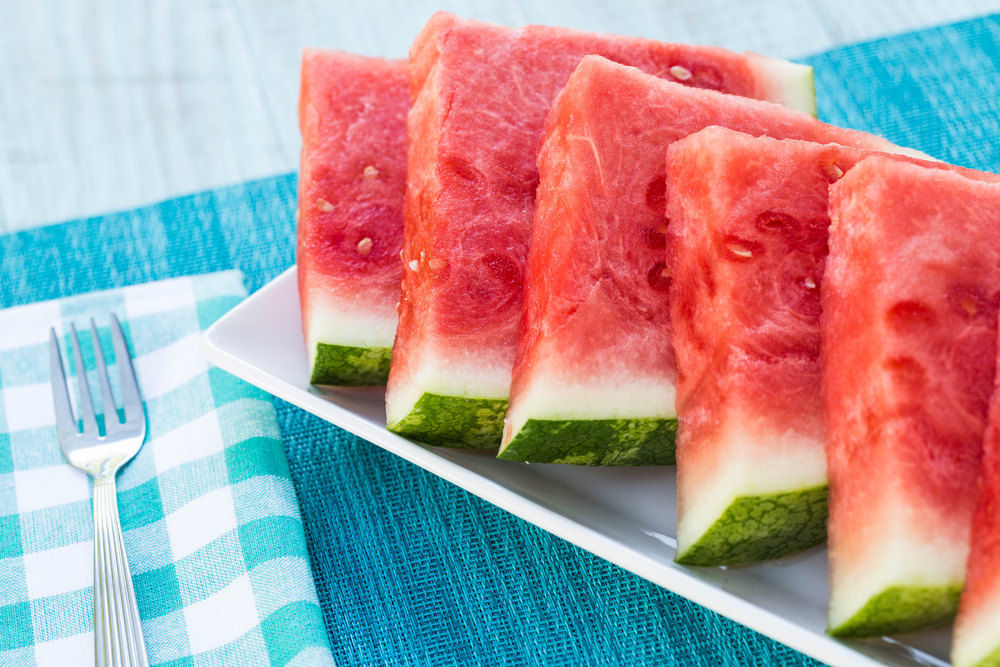 Nothing says “Summer” better than a cool, refreshing, sweet, juicy, delicious slice of ripe watermelon—no matter what time of year it is. But I often hear cautions on eating watermelon—that it is high glycemic, full of sugar, mostly water, not very nutritious, etc.

While watermelons are mostly water—90% or so, they are also full of vitamins A, B6, C, lycopene, antioxidants and minerals. Remember hearing about the lycopene in tomatoes? Watermelon, another red-colored fruit, is FULL of this powerful phytonutrient! In fact, watermelon has some of the highest levels of lycopene of all fruits and veggies. Just one cup of watermelon has 1 and a half times the lycopene of a large fresh tomato. And who eats just one cup of watermelon? I know I don’t!

Because watermelon is one of the best sources of lycopene with more than 6,500 micrograms in less than half a cup, you are getting an army’s worth of inflammation-fighting antioxidant activity! Lycopene from the red flesh of watermelon is very stable, even after the watermelon has been cut and stored in the refrigerator. Lycopene is thought to be even more powerful than its other orange/red colored ally, beta carotene—found in red and orange fruits and veggies.

Lycopene is a powerful natural anti-inflammatory and antioxidant, valued for its role in protecting the cardiovascular system, bone health, and preventing cancer. Along with lycopene, watermelons contain another powerful phytochemical, citrulline, an amino acid. Citrulline gets converted into another important chemical in the body, arginine, or L-arginine. Arginine is used to create nitric oxide, which has powerful benefits on the heart and blood vessels. NO can actually cause blood vessels to relax and open up, lowering blood pressure and helping the body carry more oxygen to parts of the body where it is needed–like muscles, your heart and your brain. A study from Florida State University found that watermelon could make a significant difference in lowering blood pressure–especially in overweight people, by relaxing the blood vessel walls.

Citrulline, when it converts into arginine, can also help prevent excess accumulation of fat in fat cells, because it blocks an enzyme that stores this fat. And because citrulline is a precursor to nitric oxide, it can also help improve erectile dysfunction in men, in a similar way that Viagra works—although you would have to quite a bit of watermelon to get the same effect as Viagra.

As you can see in this article, watermelons are on the list of foods that beat statins for heart health!

It’s All About the Lycopene

Carotenoids are powerful antioxidants, capable of destroying free radicals which attack our bodies and can contribute to chronic disease and aging. In one study of 13,000 adult Americans, low levels of carotenoids were a key predictor of early death. Especially low blood levels of lycopene! Lycopene protects our cardiovascular system, the male reproductive system, and in the skin, it protects and prevents UV damage from the sun.

Several studies have been conducted showing the strong link between levels of lycopene and heart disease. Analyses from the Physicians Health Study showed a 39% decrease in stroke risk in men with the highest blood levels of lycopene. Another study in Finland following 1,000 men for 12 years has had similar results as well.

Lycopene is a life-saver in more ways than one! Besides its cardiovascular benefits, lycopene’s antioxidant power extends to anti-cancer effects as well. A 2014 meta-analysis of 10 studies shows dietary lycopene to be protective against ovarian cancers, as well as brain tumors and breast tumors.

“Based on these results, we hypothesize that the consumption of a diet rich in lycopene-containing foods reduces the aggressive potential of prostate cancer by inhibiting the neoangiogenesis that occurs in tumor development,” Dr. Giovannucci’s team reported online ahead of print in the Journal of the National Cancer Institute.”

Watermelons get their name because they are over 90% water, and that water is full of electrolytes and potassium which helps you stay hydrated or to rehydrate. The perfect fruit to eat on hot summer days, or after a hard, sweaty workout! And that delicious juice can also help prevent muscle soreness—especially if you have watermelon before your intense workout.

Its Not Just the Red Part

While most of us only eat the juicy red flesh of the watermelon, the whole thing is actually edible and chock full of nutrients! From the red center to the stem end, and also the blossom end–including the white part near the rind–are a plethora of impressive antioxidants, flavonoids, lycopene, and vitamin C. Even the green rind is full of nutrients. The rind is full of chlorophyll, and contains even more citrulline than the red flesh. Try throwing your watermelon rinds into the blender with fresh squeezed lime juice for a healthy slushy treat.

It is still best, however, to pick ripest, reddest watermelon you can find. Lycopene content continues to increase all the way up until the time the watermelon is at its reddest and ripest.

And don’t spit out those seeds, unless you are in a watermelon seed-spitting contest! The black watermelon seeds are not only edible, but actually extremely good for you. They are full of iron, zinc, fiber and protein. Seedless watermelons are ok to eat too—they are not genetically modified, only hybrid forms of watermelon bred especially for their no-seed content.

Watermelons also are rich in anti-inflammatory substances including cucurbitacin E, tripterpenoid which help to block the pain and inflammation of certain enzymes, in a similar fashion as NSAID’s like ibuprofen and aspirin.

While being very low in calories (only about 46 calories in a cup), watermelon also contains an impressive variety of other important essential nutrients including:

The Age Old Question—How Do You Pick the Perfect Watermelon?

It can be a huge gamble finding the perfect, red, sweet watermelon. But—if you know what to look for, there is a real method to finding the best one. Look on the underside of the watermelon for a pale, butter-colored yellow spot—not white or green. This is one of the best indicators of the ripeness of the watermelon. Also pick up a few and choose the one that is heaviest for its size. Many people ‘thump’ the watermelon to check its ripeness too—listen for the best hollow bass sound.

Be aware that watermelons do contain a reasonable quantity of fructose, so be mindful of your sugar intake, and eat watermelon in moderation.  With that said, because watermelons are so filling, and have both high water content AND high fiber content, the old myth that watermelons are high glycemic is not entirely true… This is because the “glycemic load” of a watermelon is actually fairly low since it’s nearly impossible to overeat large quantities of a food that is as filling as watermelon.

Furhrman, J., MD. How Tomatoes Can Protect You Against Heart Attack and Stroke. Retrieved from http://www.timigustafson.com/2013/how-tomatoes-can-protect-you-against-heart-attack-and-stroke/

Mercola, J., DO. (2014). 6 things you didn’t know about watermelon. Retrieved from http://articles.mercola.com/sites/articles/archive/2014/07/21/watermelon-nutrition.aspx#_edn15

Mike Geary has been a Certified Nutrition Specialist and Certified Personal Trainer for over 15 years now. He has been studying nutrition and exercise for almost 25 years, ever since being a young teenager. Mike is originally from Pennsylvania, but has fallen in love with mountain life and now resides in the picturesque mountains of Utah. Mike is an avid adventurist and when he’s not spending his time skiing, mountain biking, hiking, or paddleboarding on the lake, he has enjoyed skydiving, whitewater rafting, piloting an Italian fighter plane (seriously), scuba diving, heli-skiing, and traveling all around the world, enjoying learning about different cultures. At the age of 40, Mike now feels healthier, stronger, and more energetic than when he was 20... All because of a healthy lifestyle and great nutrition!
Previous Artichokes: 10 Health Benefits you Didn’t Know
Next Cilantro: 7+ Reasons to Love this Super-Herb for Your Health

Eleven Great Foods to Detox and Protect Your Liver

What is this vegetable called Radicchio