White Meat vs Dark Meat (Plus the skin) 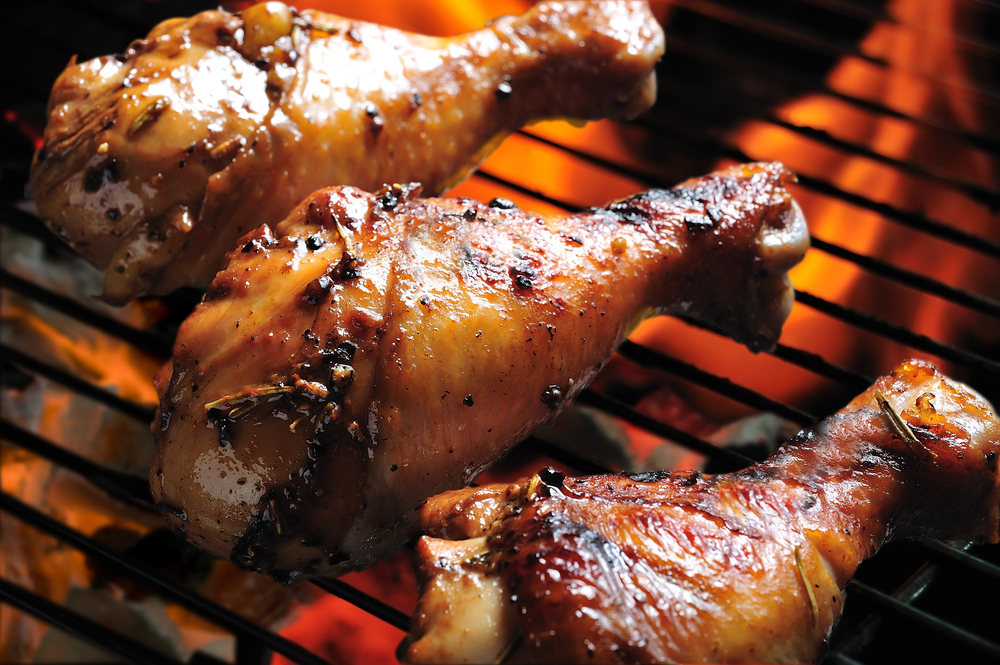 B: Cat Ebeling
co-author of the best-sellers:  The Fat Burning Kitchen, The Top 101 Foods that Fight Aging & The Diabetes Fix

White meat chicken and turkey have been the darling of health and weight loss folks, and its been promoted as the ‘low fat/low calorie’ meat that was the perfect protein. White meat has about half the saturated fat of dark meat, and for this reason alone it has been falsely pushed as the healthier alternative because of outdated health beliefs by many gurus. While white meat is largely a protein delivery system–dark meat contains many more nutrients and its time to become a ‘leg man’—or woman!

White meat has had its day, and its time to go to the darker side, which has merits above and beyond white meat. According to the Department of Agriculture, an ounce of boneless, skinless turkey breast contains about 46 calories and 1 gram of fat, compared with roughly 50 calories and 2 grams of fat for an ounce of boneless, skinless thigh. And don’t forget the skin! Also, if you are eating free-range, organic turkeys and chickens, that fat is generally healthy fat—good for your skin, joints and immune system–and full of healthy omega 3 fats, as well, depending on what the turkeys or chickens ate.

So what makes white meat white, and dark meat dark?

Well it has to do with how much that particular muscle was used. Since chickens and turkeys, especially the free-range ones, use their legs to cruise around the farmyard, but generally don’t fly or use their wings much, their legs and thighs are dark. This is because of a compound in the blood that results from the movement of the muscles. The more movement, the darker the muscle. Dark meat contains myoglobin, similar to hemoglobin, that is a substance in poultry blood that allows for transport of oxygen—necessary for muscles that are being used. Muscles that are well-used, are also full of readily available iron, which is useful in our bodies as well, to help transport oxygen to all parts of the body as well.

Besides iron, dark meat contains more selenium, zinc, vitamins A and K, riboflavin, thiamine, and B6 and B12, as well as a supernutrient called taurine.  Taurine is a nutrient known be an anti-inflammatory nutrient, helps in blood pressure regulation, healthy nerve function, production of bile acid, (which breaks down fat), and other important functions. According to a new study by researchers at the New York University School of Medicine, taurine, significantly lowers the risk of heart disease, reducing mortality by as much as 80%, as well as protecting against diabetes and high blood pressure.

Many U.S. doctors recommend eating white or light meat instead of dark meat, because it is lower in saturated fat, but we now know that saturated fats are actually mostly healthy, and not the villain they were made out to be in the 80s and 90s fat-phobia period.

In fact, the NYU study demonstrates how dark meat ultimately packs a stronger nutritional punch. The study appears online in the European Journal of Nutrition. Taurine is such a powerful nutrient that it is considered a primary nutritional factor for longevity. Taurine also promotes insulin sensitivity, electrolyte balance, eyesight and hearing. Certain diets, especially vegetarian and vegan diets lack taurine and it has been found that diseases such as liver, kidney, heart disease, as well as diabetes and cancer, cause an even greater deficiency in taurine. Age is another factor that creates an extra need for taurine, as our bodies slow down the production of it as we age.

And new research is looking at the benefits of taurine for the human brain. Taurine, is one of the most important cognitive supplements, and can help to slow down age-related loss of memory and cognitive powers, as well as protecting against environmental toxins. High taurine levels are especially associated with eating dark meat chicken, oysters and clams.

Show me some skin!

Many people pay extra just to have “boneless, skinless” chicken or turkey meat, but its time to start eating the whole bird for maximum benefits!

There are a lot more edible parts to chicken or turkey than just the meat. When we strip away the skin, we are stripping away the healthy fats (provided it is organic and free range) and collagen, as well as other benefits. Chicken and turkey skin contain a large amount of monounsaturated fat, the same healthy fat you find in olive oil. Olive oil as you know, contains many healthy benefits for the whole body, as does the oleic acid in chicken and turkey skin. In fact, the majority of fat in chicken skin is actually heart-healthy unsaturated fats, according to Harvard School of Public Health. The U.S. Department of Agriculture (USDA) National Nutrient Database reports that 1 ounce of chicken skin contains about 3 grams of saturated fat, but provides 8 grams of unsaturated fat.  Although the amount of saturated fat is actually a useless fact, since we’ve already established that saturated fat is not bad for our health in any way.

Skin is almost pure collagen. Collagen as you may already know, is one of the most important nutrients you can add to your diet. So important, it’s probably worth writing a whole other blog on just how beneficial that stuff is. You can get plenty of collagen from the skin of chicken and turkey, bones, tendons, and ligaments. You know those crunchy parts on the ends of the legs? That’s cartilage, and it’s packs a whopping amount of collagen! So chew it up!

And don’t forget to take that chicken or turkey carcass, add water or broth and cook it slowly for 24 hours or more to create a delicious bone broth or soup base full of collagen and glucosamine.  Collagen helps fight diseases like diabetes, improve your joints (drastically!), speed up healing time from athletic injuries, reduce wrinkling and sagging skin, and add strength and elasticity to hair and nails. We need collagen—it is essential!!

And lastly, don’t forget that deliciously decadent taste of freshly roasted crackly skin. That flavor and satisfaction go a long way towards making you feel full and satisfied.

What’s the takeaway?  Stop buying those stripped-down boneless, skinless parts and eat the whole bird! Dark meat, skin, bones and cartilage. Just choose organic or pasture-raised if you can find it.  Your body will thank you!

Mike Geary has been a Certified Nutrition Specialist and Certified Personal Trainer for over 15 years now. He has been studying nutrition and exercise for almost 25 years, ever since being a young teenager. Mike is originally from Pennsylvania, but has fallen in love with mountain life and now resides in the picturesque mountains of Utah. Mike is an avid adventurist and when he’s not spending his time skiing, mountain biking, hiking, or paddleboarding on the lake, he has enjoyed skydiving, whitewater rafting, piloting an Italian fighter plane (seriously), scuba diving, heli-skiing, and traveling all around the world, enjoying learning about different cultures. At the age of 40, Mike now feels healthier, stronger, and more energetic than when he was 20... All because of a healthy lifestyle and great nutrition!
Previous The Horrible Things That Happen In Your Body Within Minutes of Drinking a Soda
Next Seven More Reasons to Love Avocados That You Didn’t Already Know