The Amazing Power of Cumin 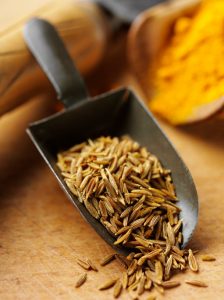 I just returned from an amazing trip to Nepal, where I ate spicy Nepali food every day. Nepali cuisine is very similar to Indian food with lots of spices and curry flavorings in almost every dish. One of the primary spices in curry powder along with the super-spice, turmeric, is cumin or cumin seeds. I just love the earthy, pungent flavor of cumin and cumin seeds! Not only does it taste great in Indian and Asian dishes, but it’s also delicious in Mexican food as well. No chili recipe is complete without a generous dose of cumin!

Cumin has been in use for hundreds of years to not only spice up and preserve food, but also as a medicinal herb. Cuminum cyminum comes from a plant which grows readily in the Middle East, China, Syria, Chile, Turkey, and all over the Mediterranean. It comes from the same family as carrots and parsley and its delicious seeds are used either whole or ground up. It also comes as black cumin as well as the typical greenish-brown seeds.

Cumin is loaded with powerful nutrients.

Cumin seeds are a excellent source of iron, manganese, potassium, sodium, calcium, magnesium, phosphorus, and vitamins A, B1, C and E.

Want to burn fat more efficiently? Research shows that cumin powder can help control blood sugar after a meal, decrease body fat and lower unhealthy cholesterol levels naturally. In a study done at Iran’s Shahid Sadoughi University, of two groups on a calorie-controlled diet, the group receiving a teaspoon of cumin a day, lost three more pounds in the three month study, but most importantly, they nearly tripled the amount of fat % lost. In addition, their triglycerides dropped by 23 points, over the control group’s 5 points. It is thought that cumin’s antioxidants, combined with its metabolism-revving and blood sugar lowering power help to bring out this amazing result!

Cumin is helpful to the digestive process, helps burn fat, is anti-inflammatory, antiseptic, helps to control/lower blood sugar, detoxes the liver, boosts the immune system, and even helps to settle the stomach.

It has long been used in Ayurvedic Hindu medicine as a digestive aid.

Cumin can stimulate appetite before a meal, and stimulate digestive enzymes after a meal. Cumin has been appreciated for its ability to stimulate the secretion of digestive enzymes, especially pancreatic enzymes, which help to break down carbohydrates, fats and protein for the body to utilize. Because they increase pancreatic enzymes, they not only aid digestion, but help the body assimilate nutrients as they are digested and broken down into usable form. In many countries, cumin seeds are chewed after meals for healthy digestion and to freshen the breath. Cumin is also well known as a way to treat gas and bloating from certain foods. For example, sprinkle some on cabbage or beans to help reduce their ‘combustion’ effects in your belly.

Cumin is helpful when fighting off a cold, especially when you have a cough and the accompanying sore, scratchy throat.

Toast some seeds carefully over low heat, and then add to a cup of boiling water and steep. Add lemon juice and honey and even some fresh ginger. Use as a tea or just inhale the steam through your nose. Cumin contains an ingredient, thymol, which is a powerful antibiotic and antimicrobial, which goes after bacteria, viruses, and fungi in the body, which then helps to strengthen the immune system.

Iron deficiency anemia is common in vegetarians and vegans (see our blog here about problems with eating vegetarian or vegan), as well as pregnant women and menstruating women—and children too. Cumin is actually rich in iron and can help other iron-rich foods, such as meat, be more readily absorbed into the body.

Cumin is effective against cancer too.

One study showed it protected from stomach and liver cancer. Cumin has powerful free radical scavengers that protect the body from attacks, and it also helps the liver detox from alcohol, medications, chemicals and environmental pollution.

Thymol, one of the active ingredients in cumin is considered a ‘galctagogue’, a substance that increases breast milk production, and is sometimes combined with fenugreek and fennel in a drink for this reason. Many midwives and natural practitioners will tell you cumin can induce labor, so if you are pregnant, check with your doctor.

Cumin also figures highly in romantic unions and was often carried in pockets at wedding ceremonies to ensure love and fidelity. Cumin has long been considered as an aphrodisiac when combined with pepper and honey. Perhaps cumin’s aphrodisiac qualities were what helped keep lovers from straying? Why not give it a try?

Fight inflammation and detox your liver with cumin

Predario, C. 2016. 1 Teaspoon of this spice could help you lose three times as much body fat. Prevention magazine. Retrieved from http://www.prevention.com/weight-loss/weight-loss-tips/cumin-spice-weight-loss

Mike Geary has been a Certified Nutrition Specialist and Certified Personal Trainer for over 15 years now. He has been studying nutrition and exercise for almost 25 years, ever since being a young teenager. Mike is originally from Pennsylvania, but has fallen in love with mountain life and now resides in the picturesque mountains of Utah. Mike is an avid adventurist and when he’s not spending his time skiing, mountain biking, hiking, or paddleboarding on the lake, he has enjoyed skydiving, whitewater rafting, piloting an Italian fighter plane (seriously), scuba diving, heli-skiing, and traveling all around the world, enjoying learning about different cultures. At the age of 40, Mike now feels healthier, stronger, and more energetic than when he was 20... All because of a healthy lifestyle and great nutrition!
Previous 17 Amazing Uses for Epsom Salt… Some You Won’t Believe
Next Why Sacha Inchi Seeds Are My New Favorite Healthy Snack