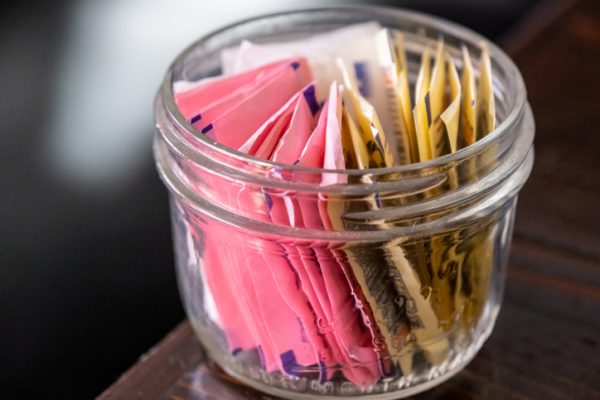 Consumers have been chasing low calorie sweeteners for years. In the past, most of the non-caloric artificial sweeteners (NAS) have been chemical concoctions with potentially serious health risks. A few we’ve had in the past couple of decades:

All of these artificial sweeteners have been found to have some adverse health effects. In addition, they can have a bad effect on the gut microbiome, increase the risk of some types of cancers, raise insulin levels, increase appetite and be the cause of weight gain.

Artificial sweeteners are also known to cause allergic reactions and can cause rashes, hives, itching, oozing skin, and eczema. They can also upset the digestive system and cause nausea, diarrhea, dizziness and stomach pains.

Key new research shows artificial sweeteners disrupt our gut microbiome, the delicate balance of beneficial bacteria that helps with digestion, brain chemicals and our immune systems. Dysbiosis can also result in gas, bloating and even bring on irritable bowel syndrome.

More importantly, artificial sweeteners can actually cause glucose intolerance. Glucose intolerance is a term for metabolic syndromes that result when normal blood glucose levels are abnormally high. This is often the beginning of prediabetes and diabetes.

In this study conducted in 2015, the effects of saccharin, aspartame, sucralose, glucose and sucrose were tested on mice. Some groups of mice received saccharin, sucralose or aspartame in water. The control groups received either plain water, glucose or sucrose (table sugar). After only 3 weeks, the control groups had normal glucose tolerance curves, but the NAS groups had already developed glucose intolerance.

Many people mistakenly believe that artificial sweeteners will have no effect on their blood glucose, when in actuality, NAS cause or worsen the very conditions many people are trying to avoid!

Obviously, we need to steer away from these artificial sweeteners that have been shown to be very detrimental to our health.

Lately there have been a couple of popular natural sweeteners to the low-calorie sweetener market—Stevia and Monk fruit.

Stevia is one natural sweetener option that has been readily available for several years, has few serious health risks and is calorie-free.

Stevia was one of the first popular natural sweeteners that showed up in in the marketplace. It is now readily available in coffee shops, restaurants and grocery stores.

Stevia comes from the leaves of a shrub native to Paraguay and Brazil and has been used as a sweetener for many years in South America.

Is there a downside to Stevia?

Pure stevia extract has never been approved by the FDA and is considered a ‘supplement’, but can be obtained through health food stores in powder or liquid form.

Generally, the stevia that is mass marketed is sold under the brand name Truvia. Coca-Cola and the food giant Cargill created Truvia as their own stevia-based sweetener. Truvia is not pure stevia but primarily erythritol, refined stevia and natural flavorings.

Erythritol is not a terrible sweetener—it does have some antioxidant activity, is vasoprotective and protects your teeth from getting cavities. You still get a low-calorie sweetener, and decent blood sugar control as well.

But do keep in mind, a mostly erythritol sweetener which can have some negative effects. Erythritol is a sugar alcohol made by fermenting the natural sugars found in corn, which is GMO corn, by the way.

Side effects of erythritol typically include bloating, cramps, gas and diarrhea. Additionally, erythritol and other sugar alcohols cause more water to accumulate in the intestines which causes diarrhea. Nausea and headaches may occur as well. Not so pleasant. Guzzling down beverages which mostly contain Truvia sweetener may not work so well for your digestive system, even if they are low-calorie.

What about Monk Fruit?

The latest entry into the natural, low calorie sweetener options is monk fruit. Monk fruit, or Luo Han Guo is a small green melon grown in China. Luo Han Buddhist monks have been cultivating monk fruit since the 13th century.

Monk fruit belongs to the cucurbit family—the same family as cucumbers and squash.

The good thing about monk fruit is that it gets most of its sweetness from a group of antioxidants called mogrosides, with mogroside V having a sweetness 250 times that of table sugar.

The only problem with going from the basic monk fruit to the natural “zero calorie” sweetener, is that most of the natural healthy compounds in the fruit are lost. Monk fruit goes through a processing to remove any off-flavors, then it is homogenized and pasteurized. The resulting extract not entirely ‘natural’ after all that processing.

Manufacturers often add in other sweeteners like erythritol or xylitol to add bulk and make it easier to use for cooking and baking. You can easily find added sugars like sucrose or dextrose if you read the ingredients list carefully, so if you are trying to totally avoid sugar, check the ingredients of your monk fruit sweetener to be sure.

While monk fruit has zero calories and carbohydrates, be careful because most baked goods, smoothies and other drinks still have plenty of calories on their own, and can fool you into thinking you are not eating any calories.

Bottom line: If you’re diabetic, on a keto diet, or just trying to cut back on sugar and lose weight, check monk fruit and stevia product labels carefully to evaluate if other sweeteners have been added.

Both stevia and monk fruit are subject to your own taste buds. If you don’t like the taste, then it really doesn’t matter. If possible, try them both to see which you prefer.

My personal preference is for monk fruit. You may want to try these luscious, healthy, frosted monk fruit brownies! These are amazing!

Mike Geary has been a Certified Nutrition Specialist and Certified Personal Trainer for over 15 years now. He has been studying nutrition and exercise for almost 25 years, ever since being a young teenager. Mike is originally from Pennsylvania, but has fallen in love with mountain life and now resides in the picturesque mountains of Utah. Mike is an avid adventurist and when he’s not spending his time skiing, mountain biking, hiking, or paddleboarding on the lake, he has enjoyed skydiving, whitewater rafting, piloting an Italian fighter plane (seriously), scuba diving, heli-skiing, and traveling all around the world, enjoying learning about different cultures. At the age of 40, Mike now feels healthier, stronger, and more energetic than when he was 20... All because of a healthy lifestyle and great nutrition!
Previous What’s the Deal with Bulletproof Coffee?
Next 7 Good Reasons to Use Black Garlic