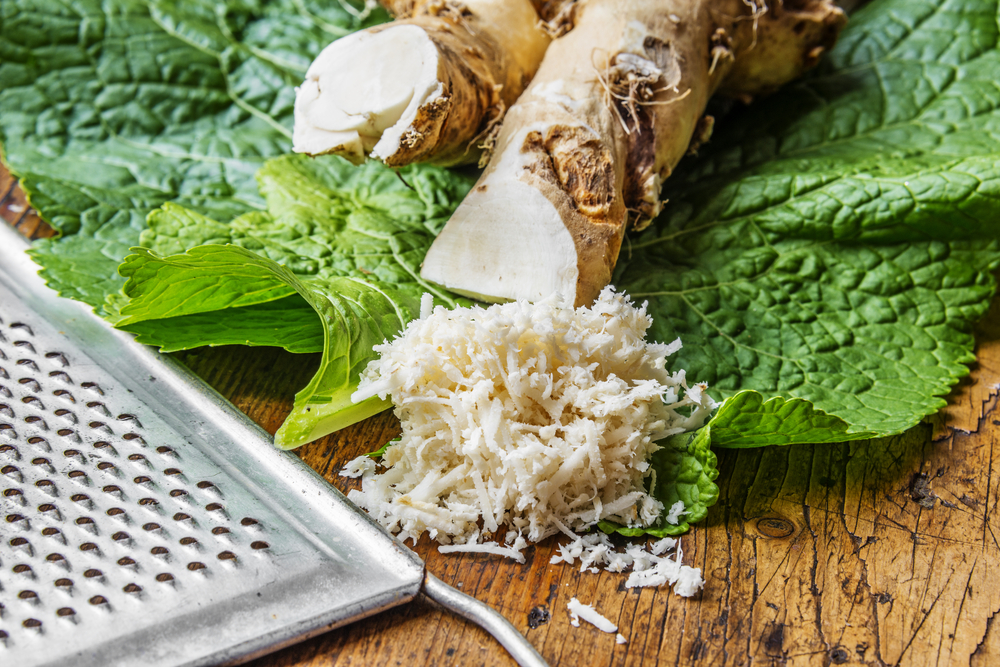 Horseradish is usually used as a spice and is known for its strong flavor, often used in sauces or as a topping for meat or seafood. Horseradish is that delicious biting hot flavor that makes your nose burn and eyes water when you take a drink of a good bloody Mary or dip your shrimp into sauce. While some may dislike its intense flavor, this humble and often overlooked ingredient is an amazing root vegetable with a major health kick!

Horseradish is a member of the same Brassicaceae family which also includes cabbage, broccoli wasabi, and mustard, which are full of healthy antioxidant compounds called glucosinolates. When horseradish’s large white root is cut, it releases a powerful compound called sinigrin. Enzymes in the plant change the sinigrin into mustard oil, which causes the pungent burning sensation and taste that is so ubiquitous with horseradish. This root has been used for thousands of years in both medicinal and culinary practices worldwide.

Horseradish has a ton of health benefits and is packed with nutrients and phytochemicals that make it valuable for its anti-inflammatory characteristics, and its cancer-fighting ability. Horseradish contains fiber, large amounts of vitamin C, potassium, calcium, magnesium, zinc, and manganese, along with some very serious antioxidants. Horseradish works as a digestive stimulant, increases circulation, and works as a natural diuretic. Its anti-inflammatory properties help to relieve arthritis and other inflammation in the body. Horseradish is also known for its antibiotic ability as well.

Horseradish’s active ingredient, sinigrin, is a type of antioxidant called a glucosinolate, which is found in many cruciferous vegetables—but horseradish contains ten times the cancer fighting ability as broccoli! Sinigrin has been found in scientific studies, to be extremely powerful against cancer cells, preventing the cell mutations that cause cancer, as well as inhibiting the growth of any cancerous tumors.

Horseradish is also a very effective antibiotic, especially against E.coli, staphylococcus aureus, and works better than sodium benzoate, a chemical additive used as a preservative in foods. Horseradish also stimulates the immune system and helps it fight off bacterial and viral infections.

Horseradish is especially powerful against sinus infections, coughs, colds and even bronchitis and works better than some antibiotics, without the unhealthy side effects. The irritating effects horseradish has on your nasal passages are actually very beneficial as it stimulates mucous secretions which help to clean out the nasal passages, washing away harmful bacteria in the process.

The diuretic action of horseradish, combined with its antibiotic ability means it is a viable treatment for urinary tract infections. It also helps the body get rid of toxins, and promotes healthy kidneys. Its diuretic action also works well to lower blood pressure, similar to some blood pressure medications.

Horseradish stimulates digestion, and helps to increase the flow of bile, an enzyme in the body that helps to dissolve cholesterol and fats in the diet.

Fresh horseradish is usually seen in stores already prepared as a condiment but you can also purchase fresh horseradish in its root form to grate into sauces and dishes. Beware though, as soon as you chop or grate the horseradish, your eyes and nostrils will know!

What is horseradish (2016). Fiery Flavors. Retrieved from http://www.fieryflavors.com/what-is-horseradish/

Mike Geary has been a Certified Nutrition Specialist and Certified Personal Trainer for over 15 years now. He has been studying nutrition and exercise for almost 25 years, ever since being a young teenager. Mike is originally from Pennsylvania, but has fallen in love with mountain life and now resides in the picturesque mountains of Utah. Mike is an avid adventurist and when he’s not spending his time skiing, mountain biking, hiking, or paddleboarding on the lake, he has enjoyed skydiving, whitewater rafting, piloting an Italian fighter plane (seriously), scuba diving, heli-skiing, and traveling all around the world, enjoying learning about different cultures. At the age of 40, Mike now feels healthier, stronger, and more energetic than when he was 20... All because of a healthy lifestyle and great nutrition!
Previous 4 Essential oils that are more powerful than antibiotics
Next Warning: Your food wrappers contain compounds that can harm your health