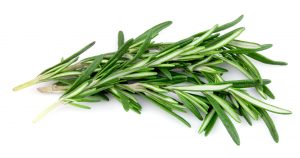 I’ve shown you in previous articles how herbs and spices most times contain a LOT more antioxidants than fruits or vegetables do… and rosemary is one of those perfect examples.

The rich savory smell of rosemary makes you think of delicious Mediterranean food baking, but the smell of rosemary should actually make you think of a powerful natural anti-aging therapy. In fact, rosemary could be one of the key foods to slow down and even reverse many aspects of aging! Not only does this herb taste great in roasts, soups, stews and other dishes, but it is also a great source of iron, calcium, and vitamin B6—and some powerful anti-aging phytochemicals as well.  Rosemary is part of the same family as mint, oregano, thyme, basil and lavender and has been used for years as a medicinal solution to many health issues—especially those that deal with aging.

Rosemary contains a wealth of anti-aging properties—most notable being its ability to improve memory and focus—especially in the elderly. Rosemary’s rich source of antioxidants and anti-inflammatory compounds are thought to be the key to its antiaging ability, including rosmarinic acid, caffeic acid, betulic acid, and carnosol.

A research group from Burnham institute for Medical Research reported a key ingredient in rosemary that specifically targets free radical damage in the brain. The substance known as carnosic acid or CA can actually protect the brain from strokes and other neuro-degenerative diseases, including Alzheimer’s and normal brain aging, and according to a study published in Cell Journal. Carnosic acid is especially useful in protecting against beta amyloid-induced neurodegeneration in the hippocampus, one of the key factors in the development of Alzheimer’s disease.

Scientists identified CA as a substance that is only activated when necessary; in this case, it activates only when there is free radical damage. So it is specific to repairing only what is damaged in the body. This type of action is termed “pathological-activated therapeutic” or PAT. PAT’s are far more beneficial than many pharmaceutical drugs that create widespread side effects all over the body, and carnosic acid is being investigated as medical treatment for brain disorders that result from aging.

Rosemary exerts other beneficial effects on brain power by enhancing levels of concentration and memory, according to research in Psychopharmacology. Rosemary contains another powerful chemical component, 1,8-cineole that was scientifically tested on 20 human subjects, and the results showed that the higher the concentration of this substance, the better the person’s cognitive performance.

Rosemary is highly effective against cancer, too. Research published in Oncology Reports found that crude ethanolic rosemary extract inhibited cell growth in leukemia and breast carcinoma cells, along with its potent anti-inflammatory and antioxidant properties. And yet another study from Bioscience, Biotechnology, and Biochemistry found rosemary to be a highly effective “herbal anti-inflammatory and anti-tumor agent.”

And here is another reason to enjoy the taste of rosemary on your grilled meats—rosemary inhibits formation of the Heterocyclic Amines (HCAs), the cancer-causing compounds that are created when meat is grilled, pan-fried or broiled, according to the Journal of Food Science.

Mike explains in this article why to always marinate meat in herbs before grilling in order to reduce carcinogens.

One of rosemary’s most important functions is as an anti-inflammatory agent. Carnosol and carnosic are two powerful antioxidant and anti-inflammatory compounds that reduce inflammation, helping everything from gout, arthritis, and sore muscles to sports injuries.

The anti-inflammatory compounds also help to reduce inflammation in the blood vessels, helping to prevent heart disease and strokes. Rosemary is an effective pain reliever that can relieve headaches—especially migraines—along with joint pain, surgical pain, and spasms.

And age-related macular degeneration, one of the most common age-related eye diseases in the U.S., can be curtailed with the carnosic acid in rosemary. In a study published in the journal, Investigative Ophthalmology & Visual Science, Stuart A. Lipton, M.D., Ph.D. and colleagues at Sanford-Burnham Medical Research Institute report that carnosic acid promotes eye health, especially age-related eye disorders.

Rosemary, oregano and marjoram all contain compounds that help manage type 2 diabetes blood sugar levels as well as some of the currently prescribed diabetes medications.

Rosemary is also an antibacterial, specifically against stomach infections including h.pylori, which causes ulcers, and staph infections. And speaking of stomachs, rosemary has been used by many cultures as a natural remedy for upset stomach, nausea, constipation, diarrhea, and indigestion.

Rosemary also has a diuretic effect on the body, meaning that it can help the kidneys to flush out toxins, salts, and even excess harmful fats, while it helps support and detox the liver.

Rosemary is powerful enough to actually interfere with certain medications, so check with your doctor if you are taking any anticoagulant drugs, ACE inhibitors (blood pressure), diuretics, or lithium.

How to get more rosemary in your diet?

Fresh or dried rosemary is great in marinades, rubs, dressings and sauces, so use it an ingredient in your meals, as often as possible. It is great on everything from fish and chicken to meat, sauces, dressings, vegetables, or salads. Try this rosemary tea: Add a teaspoon or so to boiling water, steep for 15 minutes, and add a squeeze of lemon, and a touch of honey. Strain off the pieces of rosemary before drinking. You can also try this recipe for scrambled eggs with rosemary and capers to get some health-promoting rosemary in your daily breakfast.

Rosemary also comes dried or powdered in capsules, and according to Dr. Al Sears, M.D., he recommends taking two 400 mg capsules up to three times a day—but avoid if you are pregnant, have high blood pressure, or epilepsy. You will feel healthier and younger in no time!  You can also incorporate rosemary into olive oil or delicious recipes like these rosemary lambchops!

Here’s another great article on rosemary from my friends at TheAlternativeDaily:

Mike Geary has been a Certified Nutrition Specialist and Certified Personal Trainer for over 15 years now. He has been studying nutrition and exercise for almost 25 years, ever since being a young teenager. Mike is originally from Pennsylvania, but has fallen in love with mountain life and now resides in the picturesque mountains of Utah. Mike is an avid adventurist and when he’s not spending his time skiing, mountain biking, hiking, or paddleboarding on the lake, he has enjoyed skydiving, whitewater rafting, piloting an Italian fighter plane (seriously), scuba diving, heli-skiing, and traveling all around the world, enjoying learning about different cultures. At the age of 40, Mike now feels healthier, stronger, and more energetic than when he was 20... All because of a healthy lifestyle and great nutrition!
Previous Kombucha: Benefits Including Gut Health, Immunity, Cancer-Fighter, and even helps with Weight Loss?
Next Ashwagandha – 9 powerful health benefits of this super-herb (including Thyroid health, Adrenal health, blood sugar, anxiety, and more)