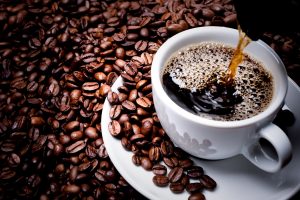 Earlier this year, a judge in California ruled that coffee should carry a cancer warning label. The ruling says that Starbucks, 7-11, and other coffee retailers must carry a warning label on every cup of coffee sold, due to the acrylamide content in the coffee.

This seems like an ODD ruling since we know of dozens of studies that show decreased cancer risks among coffee drinkers.

So, what exactly is acrylamide? Acrylamide is a compound that results from the roasting process of coffee and many other foods that are baked or roasted.  Acrylamides are present in many of our foods including: french fries, potato chips, corn chips, cereal, breads, cookies, crackers, beer and more.

Starchy carbohydrates cooked at high temperatures, especially those that are cooked to a golden brown or dark brown color usually contain the highest amounts of acrylamides. Potato chips and french fries are, by far, some of the worst offenders. Take a look at some of these levels (amounts are approximate, and depend on cooking time and heat):

Check out this FDA website for a more complete listing of tested foods and acrylamide levels. You will see that coffee contains very low levels of acrylamide compared to many other foods.

If you look at those listings above, you can see that cereal has on average 16x more acrylamides than coffee, and potato chips and french fries have almost 100x more acrylamides than coffee!  So why is California picking on coffee, when it appears that french fries are 100x more dangerous than coffee in terms of acrylamide content?  In addition, french fries and potato chips contain inflammatory refined vegetable oils, which would actually ADD to the cancer risk of those foods, whereas coffee is loaded with antioxidants that actually protect us against carcinogens.

Acrylamides were discovered in 2002 and have been found in many foods that are heated above 120 degrees or cooked to a golden brown. Starbucks and many other (dark roast) coffees are often roasted to a deep brown color, thereby increasing their acrylamide content.

The acrylamide controversy has been a part of an eight-year struggle between the Council for Education and Research on Toxics and the big coffee companies like Starbucks. California’s proposition 65, which was passed in 1986, puts cancer warnings on many substances; some of them worthy, some ridiculous.

The World Health Organization, (WHO) and the Food and Agriculture Organization (FAO) stated that levels of acrylamides in certain foods pose a “major concern” and more research is needed to determine the dangers. Since french fries, potato chips and cereals contain much higher amounts of acrylamides (up to 100x more), it seems a bit silly to have this warning on coffee but no other foods.

A few studies concluded there was an increased cancer risk in mice and rats fed acrylamide, but those studies used levels of acrylamide that was between 1,000 and 10,000 times higher than levels people get from food. Thus far, there have not been very convincing studies in humans to demonstrate that acrylamide is indeed a carcinogen. In fact, a review of more than 1,000 studies failed to find a consistent link between drinking coffee and at least 20 different types of cancer, according to scientists from the International Agency for Research on Cancer, a WHO group.

Len Lichtenfeld, the deputy chief medical officer for the American Cancer Society in Atlanta says, “Most experts are going to look at the risk of acrylamide in coffee and conclude that this is not something that’s going to have a meaningful impact on human health.”

Coffee has been shown to protect the liver against cancer because of its caffeine content, chlorogenic acid and

substances called diterpenes. Coffee also protects post-menopausal women against breast cancer. Those women who drank the equivalent of four cups a day actually had a 10% lower risk of breast cancer. Women drinking coffee also had a significantly less risk of endometrial cancer, and uterine cancer, according to the Cancer Epidemiology, Biomarkers, and Prevention journal.

Coffee contains a variety of powerful antioxidants, as I have written about earlier, that contain a variety of massive health benefits—far greater than any perceived risk of cancer from the acrylamides it contains. Several studies from around the world including France, Japan, Poland and Spain, have concluded that coffee is one of the biggest single sources of antioxidants in our diets. According to the October 2015 issue of Science News, and other important nutrition and scientific journals, coffee protects a wide variety of major health issues. Some of those include:

Coffee helps to activate the NRF2 pathway in the body, a system that fights oxidative stress, neutralizes toxins, and targets cancer cells. The NRF2 pathway has been identified as being one of the most important anti-aging and disease-fighting components in the human body.

In the intestines, coffee helps to encourage the growth of beneficial Bifidobacteria, part of a healthy microbiome. These little critters help to regulate and protect the digestive system, immune function, and mental health.

Coffee is a fat-burning beverage, increasing heart rate, breathing and metabolism—meaning you

actually burn more calories. Caffeine is also excellent for keto dieters–breaking down fat cells more efficiently and freeing up fats in the body to burn for energy. In fact, converting fat to energy is 30% more effective with caffeine.

Coffee also elevates your mood, banishes depression, and helps you feel more energetic, but be careful—too much can cause jitteriness and anxiety in some people.

Coffee is known to improve athletic performance as well. Caffeine has been shown repeatedly to increase endurance, speed, power, and shorten recovery time. While part of this is due to the effect of caffeine, another part may be due to the high levels of antioxidants in coffee. So, a cup of ‘joe’ before your workout or competition will help you go harder and longer!

This recent report from Purdue University shows coffee as being one of the richest sources of polyphenols (antioxidants) in the Western diet. Coffee contains abundant levels of phenolics, chlorogenic acid, and caffeic acid. Coffee also helps to decrease inflammatory markers, including interleukin-18 and 8-isoprostane.

How to Maximize the Health Benefits of Your Coffee

The bottom line is that coffee consumption was associated with a lower risk of death, overall. Given all the above scientific studies on coffee and health, don’t you find the California ruling for a warning label on coffee a bit ridiculous? I do.

I can only conclude that this particular judge just does not like coffee. If you are concerned about the (dubious) connection between acrylamides and cancer, avoid french fries, potato and corn chips, cereals, bread, cookies and crackers. They contain much higher levels of acrylamides. Those processed grain-based foods have already been shown to be detrimental to your health, and arylamide is just one more reason to avoid those foods.

Enjoy sipping your organic coffee and worry not! Here’s to your health and wellbeing!

Mike Geary has been a Certified Nutrition Specialist and Certified Personal Trainer for over 15 years now. He has been studying nutrition and exercise for almost 25 years, ever since being a young teenager. Mike is originally from Pennsylvania, but has fallen in love with mountain life and now resides in the picturesque mountains of Utah. Mike is an avid adventurist and when he’s not spending his time skiing, mountain biking, hiking, or paddleboarding on the lake, he has enjoyed skydiving, whitewater rafting, piloting an Italian fighter plane (seriously), scuba diving, heli-skiing, and traveling all around the world, enjoying learning about different cultures. At the age of 40, Mike now feels healthier, stronger, and more energetic than when he was 20... All because of a healthy lifestyle and great nutrition!
Previous The Keto Diet for Type 2 Diabetes (How effective is it?)
Next The Dangers of Green Smoothies (Can contain toxic levels of certain compounds)