The Truth About Non-Stick Pans 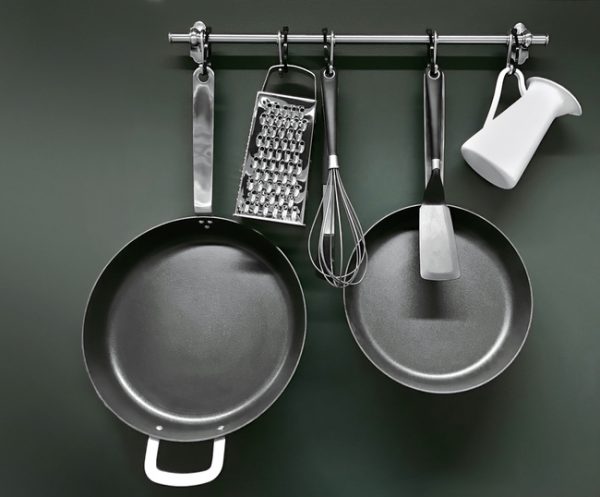 I was fortunate enough to get to spend some time in Baja Mexico this year. Although we stayed at nice homes with great kitchens, I was dismayed to find that most of the pans available to use were scratched up Teflon. I actually went out and bought my own pan to use so I could avoid any possible toxic elements coming out of the pans.

Is Teflon safe to use?

Until the year 2013, Teflon was made using a chemical called perfluorooctanoic acid, or PFOA. PFOA is a possible carcinogen, a hormone disrupter and a reproductive toxin. PFOA has been linked to a number of health conditions, including thyroid disorders, chronic kidney disease, liver disease and testicular cancer. It has also been linked to infertility and low birth weight babies.

What’s more, it was found in the blood of more than 98% of people who took part in the US 1999–2000 National Health and Nutrition Examination Survey (NHANES).

The other big problem with PFOA is that it is ‘highly persistent’, meaning once it’s there—in your body, in the soil, in the water or air—it does not leave. PFOA’s tend to end up in our drinking water. In fact, many water sources have been contaminated by PFOA factories over the years and it’s now there forever.

While most of the carcinogens are eliminated during the manufacture of Teflon pans, small amounts do remain. The biggest problem is that when Teflon is overheated, the chemicals not only enter the food being cooked, but they vaporize into the air as well. Here’s a list of some of the toxic ingredients that get released (Ugh!):

Because of the concerns to human health and the environment, Teflon with PFOA has been phased out, as of around the year 2013. Most non-stick cooking pans now use a chemical compound called ‘PTFE’ (polytetrafluoroethylene) in their products, which still poses a danger to our health when overheated, causing the chemical compounds to break down and release toxic fumes. However, many people still have the older, scratched up Teflon pans in use in their households. These should be thrown out.

When Teflon is heated to temperatures above 500°F (250°C), the coating on the nonstick cookware begins to break down, releasing toxic chemicals into the air. Inhaling these toxic chemicals can actually make you sick, and it’s often known as the “Teflon flu”. This includes both older Teflon and the newer (post 2013) Teflon.

So you’re thinking, “Ok, I just won’t heat my pan up super-hot, and I will be fine.” Yes, but it’s unbelievably easy for pans to quickly get to 500 degrees, as you can see from this video. (Keep in mind, this video is referring to Celsius degrees, not Fahrenheit).

So, if you really insist on using Teflon pans, keep these things in mind:

Cast Iron–My favorite is the standard cast-iron skillet–properly seasoned of course. When it is well seasoned, cast iron pans are basically non-stick. They also last forever and can withstand high temperatures. You can cook just about anything in them. They are great for searing meat, along with a variety of other types of cooking.

Biggest downside, they are heavy and can be harder to maneuver. Be careful if you have a glass/ceramic cooktop. They can easily break that surface. I know, I did it to my beautiful 5-burner cooktop. Not cheap to replace!

Ceramic—Ceramic cookware is a relatively new product. It has excellent nonstick properties, but the coating can be easily scratched, which means it begins to lose it’s ‘non-stick-ness’. It is, however, quite safe. Ceramic coatings are made of silica, so they aren’t actually ceramic, but more like glass. Ceramic coatings like this are also called “Thermalon”. Compared to the PTFE Teflon-style coatings, ceramic pans can function well at higher temps, up to 450C/840F. One of the more popular brands is, “The Green Pan”.

Stainless Steel–I am a big fan of stainless steel pans, especially the higher quality ones like All-Clad. I find them to be far more versatile, and easy to use than most other pans. These pans are capable of cooking food at high temps. So, you can sear meat and cook stir-fries and not worry about making the pan too hot to damage it. I’ve also noticed that a good quality stainless pan can actually become somewhat ‘seasoned’ and things like eggs don’t stick if you cook them at lower heat

Unlike ordinary, lightweight aluminum pots and pans, which are highly reactive with acidic foods (like tomatoes), anodized aluminum cookware is safe. It is also non-stick, scratch-resistant and easy to clean. Just be aware that if the inside lining is scratched, acidic liquids like tomato sauce can leach into the metal, which can then get into food.

‘Granite’ Cookware–Granite cookware does not actually contain any granite. Instead, it consists of a stainless-steel inner core that is covered with porcelain enamel, making it similar to ceramic cookware. The surface is made by fusing porcelain enamel at very high temperatures to create a non-stick surface. The look of the cookware closely resembles granite, as it has a solid black surface with smaller flecks of gray or white scattered throughout.

There are many healthy nonstick choices to cook with, and you cannot go wrong with cast iron and stainless steel. They last forever! However, if you insist on ‘sticking’ with your Teflon, make sure it is newer, not scratched and you only use it for low temp cooking. Bon Appetit!

Mike Geary has been a Certified Nutrition Specialist and Certified Personal Trainer for over 15 years now. He has been studying nutrition and exercise for almost 25 years, ever since being a young teenager. Mike is originally from Pennsylvania, but has fallen in love with mountain life and now resides in the picturesque mountains of Utah. Mike is an avid adventurist and when he’s not spending his time skiing, mountain biking, hiking, or paddleboarding on the lake, he has enjoyed skydiving, whitewater rafting, piloting an Italian fighter plane (seriously), scuba diving, heli-skiing, and traveling all around the world, enjoying learning about different cultures. At the age of 40, Mike now feels healthier, stronger, and more energetic than when he was 20... All because of a healthy lifestyle and great nutrition!
Previous 5 Odd Uses for Honey
Next How to Drink Less Alcohol