The Top 10 Foods to Improve Your Sex Life & Boost Libido 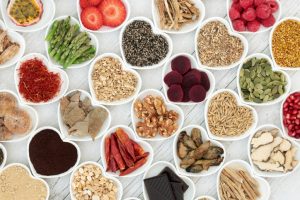 Falling asleep in front of Netflix again instead of rolling in the hay? Perhaps you need a little boost. Add in a few of these foods to get things rocking and rolling right away, and you won’t care what’s on Netflix!

Figs have been associated with sexuality in almost every culture. In ancient Greece, the arrival a new fig crop actually initiated sexual rituals. Figs are also full of sexy antioxidants, flavonoids, fiber, and potassium.

While celery may have a reputation for being a bland and boring vegetable, it is anything but boring.

Besides being full of fiber, vitamin K, folate, potassium, and manganese, each stalk of celery is full of pheromones. Pheromones are released when celery is chewed, the odor molecules travel up your throat to your nose and then the pheromones boost arousal. Once aroused, your body sends out more scents and signals, making you more desirable to the opposite sex. Plus, eating lots of celery is said to make certain bodily secretions taste better.

Parsnips also contain high concentrations of androstanol (the naturally occurring pheromone that stimulates desire in females). These long, phallic-looking light brown veggies taste a little like a sweeter, starchier carrot. They are delicious in purees and mashes.

Parsnips have the added advantage of containing boron, which has been shown to help the body metabolize and utilize estrogen well, and also enhance blood levels of testosterone—good for both men and women! These and other root vegetables are rich in folate, as well as vitamins A and C, and studies have found they boost blood flow to the brain and essential body parts.

Avocados were referred as by the Aztecs as “testicles”, probably because of their

suggestive shape. But avocados are an aphrodisiac beyond just their shape. They are rich in healthy monounsaturated fats, making them great for healthy, soft, smooth skin, and hair.

And internally, they are good for your heart and blood vessels. Keeping blood flowing well is essential for a healthy sex life and healthy blood flow prevents things like erectile dysfunction. Avocados are also high in omega 3 fatty acids, and vitamin B6, both of which help to get you in a great mood, all that much better reason to jump in the sack!

Watermelons are a sweet, luscious, juicy, sexy food. They are also full of vitamins A, B6, and C, as well as lycopene, antioxidants and minerals. Lycopene is also present in tomatoes and is a powerful cancer-fighter. And watermelon, another red-colored fruit, is full of this powerful phytonutrient! Watermelon has some of the highest levels of all fruits and veggies.

Watermelon rind (the white part that you usually don’t eat) is also full of a substance called citrulline. The citrulline in the watermelon is then converted into the amino acid arginine. Arginine is very useful to boost nitric oxide levels which help to open up blood vessels. This is also what Viagra does to treat or prevent erectile dysfunction. And, that folks, is a good thing!

Even the very shape of a big fat asparagus stalk is suggestive. Asparagus also contains

a variety of nutrients that boost your sex life. Yes, back in the 17th century even, Nicolas Culpepper wrote about asparagus saying, “…[it] stirs up lust in man and woman.” In the 1800’s in France, brides and bridegrooms were often served three courses of the sexy spears just prior to their nuptials to stimulate—well, you know. Oh, and by the way, the French word for asparagus is “asperge” which is slang for penis.

Asparagus also stimulates a natural body chemical called histamine. Now, most people think histamines are associated with allergic responses, and that is true, but they serve another purpose as well. Histamine actually improves erectile function and has a positive effect on both male and female hormones. Healthy histamine levels mean easier sexual orgasm, for both men and women. Please pass the asparagus!

We all know chocolate is for lovers, but do you know why? Dark chocolate contains something called phenylethylamine that releases endorphins—you know, those feel good brain chemicals. Endorphins are also triggered by exercise or sex, and they increase feelings of attraction between two people. So, eating chocolate around someone you find attractive—and sharing it, may create some sizzle!

Brain scans from a British study show eating chocolate causes a longer, more intense brain buzz than kissing. Well, I guess that depends on who you are kissing, right? Don’t forget to concentrate your love on dark chocolate that is full of antioxidants and healthy phenols, and don’t forget to share it with someone special!

Ah, yes, you probably knew I was going to mention everyone’s favorite

aphrodisiac, oysters. But what about red meat? Well, if you haven’t noticed, a nice fat red hunk of grass fed steak is pretty darn sexy if you ask me. But the reason both oysters and grass fed red meat are mentioned is because both are great sources of zinc, the mineral that curbs production of a hormone called prolactin, which at high levels can cause sexual dysfunction.

Zinc is also an important muscle-building nutrient, along with high concentrations of conjugated linoleic acids (CLA). Zinc increases levels of testosterone, an important hormone for desire and sexual performance for both men and women. Yes, women need testosterone too! For women, zinc nourishes the ovaries—the source of estrogen, progesterone, and testosterone, keeping them primed for bedroom action. Research also shows that for men, zinc improves sperm count and swimming ability as well as sexual potency in men. And of course, oysters and steak are full of tons of vitamins and minerals, including iron, which aids in energy and performance.

Yep, honey is definitely sexy, and it even looks sexy. That thick, sweet, gooey stuff promotes testosterone production in men and women—which we know is essential for desire. And, it also helps to metabolize estrogen in women.

Research shows us that honey can increase nitric oxide levels, opening up blood flow to all important areas! Honey has a long history of an aphrodisiac. This sweet sticky substance has been associated with bliss, romance, marriages, and honeymoons. Indian weddings, use honey as an offering to the groom as a symbol of sweetness in life. And Vikings used honey as a fertility booster, drinking mead (wine made from honey), as newlyweds.

Beets are considered a superfood and they are beneficial for all parts of the body! Beets not only look and taste sexy (try them dripping with grass fed butter and a squeeze of lemon), but they are full of vitamins and minerals to give you energy and endurance.

Beets are full of nitric oxide which increases blood flow to important body parts in both men and women, enhancing sexual activity, interest and performance. In fact, some studies have compared beets to Viagra, they are so effective. Regular consumption of beets actually opens up blood vessels and has been scientifically proven to be an athletic performance-enhancing food. And as you know, performance enhancement in the bedroom can garner you a first-place award! Enjoy.

There are many foods, herbs and spices that can enhance and improve one’s sex life. This is just a small sampling of some of the top foods that have a positive effect on sex for men and women. Just simply eating healthy foods including organic, colorful vegetables full of antioxidants, vitamins and minerals, along with wild caught fish and seafood, naturally raised meats, and healthy fats like butter and coconut oil, all contribute to an energetic and enthusiastic interest in sex with your favorite person.

If you’re a man over the age of 40, then pay attention…

If you’re a woman who loves her man, and is afraid of his increasing lack of masculinity, then please take a moment to read this very important message…

Today’s man, that’s you, is under attack from multiple angles – you’re being told that being a MAN is no longer allowed, and the foods and drinks you’re eating are slowly, and effectively stripping away your manhood, leaving you with…

An increasing amount of jiggly belly fat that will NOT go away, decreased sex-drive and E.D. problems, trouble sleeping, depression, lack of confidence, joint and muscle pain, risk of an early, and painful death…

Mike Geary has been a Certified Nutrition Specialist and Certified Personal Trainer for over 15 years now. He has been studying nutrition and exercise for almost 25 years, ever since being a young teenager. Mike is originally from Pennsylvania, but has fallen in love with mountain life and now resides in the picturesque mountains of Utah. Mike is an avid adventurist and when he’s not spending his time skiing, mountain biking, hiking, or paddleboarding on the lake, he has enjoyed skydiving, whitewater rafting, piloting an Italian fighter plane (seriously), scuba diving, heli-skiing, and traveling all around the world, enjoying learning about different cultures. At the age of 40, Mike now feels healthier, stronger, and more energetic than when he was 20... All because of a healthy lifestyle and great nutrition!
Previous The Dangers of Green Smoothies (Can contain toxic levels of certain compounds)
Next Metformin vs Berberine for Diabetes (Plus this yellow herb lowers blood pressure, fights parasites, and more)