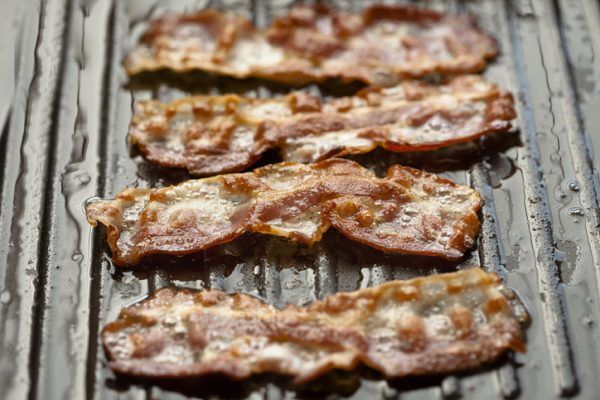 Who doesn’t like bacon? That crispy, sweet, salty, crunchy flavor is hard to dislike or duplicate. Even my favorite meat counter guy tells me that’s the first thing vegans buy when they start eating meat. I sure can’t fault that!

But headlines and health organizations have warned us of the dangers of processed meat. The World Health Organization classifies processed meat—including bacon—as a carcinogen. Another study from the British Medical Journal found increased consumption of processed meat is associated with higher mortality rates.

So, many people turned to turkey bacon. The lower fat content and the general ‘health’ appeal of turkey to the fat-conscious folks has made turkey bacon an alternative choice.

“The problem with traditional pork bacon is typically two-thirds of the calories come from fat,” says a registered dietitian. And, she says, “Half of that is saturated fat which has the bad reputation of being responsible for heart disease.” Of course, most of us now know that saturated fat is not so bad. But the question remains—is turkey bacon really a healthier alternative?

First of all, turkey bacon is not really bacon. Bacon is meat and fat from a specific part of a pig which has been cured. Turkey ‘bacon’ is actually just simulated bacon since it is not from a pig, and not any specific part of a turkey.

Turkey bacon flavor runs a distant second to real bacon and even then, it obviously does not come off the bird looking and tasting the way it does when you fry a slice of it in the pan. Turkey bacon is more for when you don’t care about the real taste of bacon but want something crisp and ‘ham-like’ to complement your eggs, and want to feel like you are being ‘healthier’. The point is, you aren’t really eating anything that is truly healthier.

Turkey bacon doesn’t even really taste like real bacon. It does contain less fat, but to make up for that, it contains a lot of other ingredients—some of them not so great—to make up for the flavor loss. Turkey bacon actually tastes more like ham or some kind of lunchmeat, quite frankly.

Here’s a list of ingredients from a package of typical turkey bacon:

Turkey bacon also generally carries a higher amount of sodium added to it. While turkey bacon claims it contains less fat, the fat it does have is nothing to brag about. Canola oil and other highly processed vegetables are NOT healthier than real, saturated fat from a pig.

How about REAL bacon from a pig? There is a wide range in both quality and health benefits or unhealthy benefits of
real bacon, depending on the source of the bacon (conventionally raised or humanely raised/organic).

Bacon is cured meat, which means it is soaked in a solution of salt, sugar and sometimes preservatives like nitrates. Then it is smoked to get its delicious flavor.

The fats in bacon contain about 50% monounsaturated fat and oleic acid, which is the same healthy fat that olive oil contains. The rest is mostly saturated fat, which once was thought to be ‘bad’ for us and for our hearts, but the latest research shows saturated fat is a necessary fat for our bodies to function well. And truthfully, once you fry bacon up in a pan, most of the fat is cooked out of the bacon and left in the pan.

Both real bacon and turkey bacon contain fairly high levels of sodium which is used to cure the meat. While some people may be sensitive to added salt in foods, it’s not bad unless you are eating large quantities of foods with added sodium which is in many packaged and processed foods.

Both real bacon and turkey bacon often contain nitrates — unless the bacon you purchase is ‘natural’ or ‘uncured’ bacon. Heat, from cooking causes these additives to form compounds called nitrosamines which can be carcinogenic. However, antioxidants like vitamin C and erythorbic acid are added to the bacon to offset the risk of the nitrosamines.

What About the Dangers of Processed Meats?

As a result, the World Health Organization (WHO) actually classified processed meats as a carcinogen, which puts it in the same category as asbestos, cigarettes, benzene, nuclear fallout, plutonium, and x-rays, among other things. But is this a bit of an overreaction?

While 17% and 18% increase in risk sounds significant, you also have to look at relative risk of colon cancer overall. Your chances are about 1 in 33,000, or three extra cases of colorectal cancer per 100,000 people who may develop bowel cancer from eating cured and processed meats.

Most importantly, in these studies on processed meat dangers is that the lifestyle variables of the people in the study have not been considered. Most people who eat a diet high in processed meat have unhealthy lifestyles: not enough vegetables or fruit, lots of highly processed foods, sedentary, and possibly cigarette smokers. In this article, red meat is shown to have numerous health benefits, especially if you choose pasture raised.

The bottom line on turkey vs. real bacon is this: real bacon is not that bad, tastes better, and if you purchase real bacon made from humanely raised/organic pigs, cured naturally without nitrates or nitrites, you have made a better, more natural choice than processed turkey bacon. You can now even purchase ‘Paleo’ style bacon without added sugars as well.

On the other hand, even if you purchase so-called ‘natural’ turkey bacon, you are still getting processed meat made of odd parts of the turkey, highly processed vegetable oils, sugar and lots of sodium.

And of course, real bacon tastes so much better! So have a couple of delicious slices of bacon and enjoy—without guilt!

Mike Geary has been a Certified Nutrition Specialist and Certified Personal Trainer for over 15 years now. He has been studying nutrition and exercise for almost 25 years, ever since being a young teenager. Mike is originally from Pennsylvania, but has fallen in love with mountain life and now resides in the picturesque mountains of Utah. Mike is an avid adventurist and when he’s not spending his time skiing, mountain biking, hiking, or paddleboarding on the lake, he has enjoyed skydiving, whitewater rafting, piloting an Italian fighter plane (seriously), scuba diving, heli-skiing, and traveling all around the world, enjoying learning about different cultures. At the age of 40, Mike now feels healthier, stronger, and more energetic than when he was 20... All because of a healthy lifestyle and great nutrition!
Previous 7 Reversible Health Conditions That Can Mimic Dementia
Next Seven Amazing Benefits of the Super Mineral Selenium