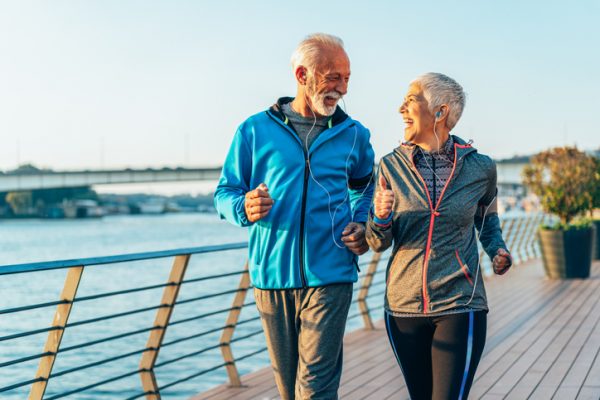 We all want to stay young, energetic, and healthy forever. But unfortunately, that isn’t entirely possible. Longevity is much more than just living a long life, longevity means living the longest, healthiest life possible.

There is good news for all those longevity enthusiasts out there: certain nutrients can actually help slow down the aging process. Longevity is a hot scientific topic these days, and many lifestyles, health habits, nutritional supplements, and medications are now being studied to discover their role in slowing the aging process.

Longevity is more about the “health span” of life, which can be defined as the period of one’s life that one is healthy. A more specific definition is being free from serious disease for as long as possible.

That is one of the ways we look at nutrients and other supplemental substances—do they benefit more than one system in the body?

One of the most consistent findings in longevity research is the simple intervention of caloric restriction (CR) for expanding the lifespan. CR protects the body from the deterioration of biological functions, and reduces the risk of diabetes, cardiovascular disease, and even cancer.

Caloric restriction is defined as caloric reduction of around 20-40% in intake. Beneficial health effects have been shown in organisms such as yeasts, mice, all the way up to Rhesus monkeys and humans—and ongoing research is being conducted with humans.

More recent research has shown that periods of fasting and restricting eating to active hours also boost health. Other scientific studies show that those that lived the longest had much better metabolic health, lower overall blood sugar and better insulin sensitivity.

This is where berberine comes in. Berberine has been receiving plenty of scientific attention because of its ability to regulate blood sugar levels and to activate the longevity pathway AMPK (adenosine monophosphate-activated protein kinase) which is your metabolism’s “master switch.” AMPK is an enzyme found in cells, that helps regulate cell energy.

ATP, or adenosine triphosphate, is an energy-carrying molecule that is found in the cells of all living things. ATP obtains energy from the breakdown of food, and releases it to fuel other cellular processes.

When ATP (Adenosine Triphosphate) levels in the cells are low, berberine activates AMPK which in turn regulates the signaling pathways to replenish ATP supplies in cells and ramp up fatty acid oxidation. So berberine helps to boost your energy by telling the body to burn more fat for energy.

Berberine is an alkaloid compound made from plants such as the barberry plant. Berberine is being researched to be one of the most effective natural supplements available in terms of longevity, blood sugar metabolism, heart disease, cancer, weight loss, and diabetes management.

Berberine has some pretty awe-inspiring health benefits and impacts your body at the molecular level. Berberine is one of the few supplements that has been found to be as effective as a pharmaceutical drug—in several different ways.

Because one of the primary actions of berberine is to lower blood sugar and mimic calorie restriction, berberine is effective in helping people lose weight. A study on the effects of berberine on body fat showed that a 500mg supplement of berberine three times a day (standard sized dose) for just 12 weeks, resulted in an average loss of 5 pounds—with no other lifestyle modifications such as calorie restriction or exercise. Body fat was reduced by 3.6%. Another study of people taking berberine showed an overall reduction in BMI—from 32 to 27.

This same study showed that participants’ cholesterol was also reduced cholesterol—primarily LDL and triglycerides—two types of blood lipids doctors consider to be risk factors for heart disease and strokes.

In this study, overall cholesterol was reduced by .61 mmol/L or 24 mg/DL. LDL decreased by 25mg/DL and triglycerides were reduced 44mg/DL.

According to some studies, berberine works by inhibiting an enzyme called PCSK9, which allows the body to remove more LDL and VLDL from the bloodstream.

Berberine has been studied for its effects on blood sugar. Study results showed a significant blood glucose-lowering effect with berberine. In one study, berberine was found to significantly decrease HbA1c levels in diabetic patients.

The effect of decreasing HbA1c was comparable to that of metformin, a widely used pharmaceutical oral hypoglycemic medication, also known as Glucophage. Several impressive studies show that berberine can lower blood glucose as effectively as metformin–without the negative side effects.

Two of the best-known peer-reviewed studies published in the journals Metabolism and the Journal of Clinical Endocrinology compared berberine in one group to metformin (Glucophage) in another group. The berberine group had very similar blood sugar-lowering effects as the metformin group.

In addition, utilizing berberine also effectively reduced the patients’ triglycerides, LDL cholesterol, and blood pressure–three things that metformin does not.

Berberine’s health and longevity benefits are not limited to just blood sugar and cholesterol. Berberine is being studied for other health benefits including its ability to kill cancer cells and prevent their spread. Research conducted thus far has shown that berberine is effective at stopping the growth and spread of several different types of cancer including breast, lung, gastric, liver, colorectal, ovarian, cervical, and prostate cancer.

Berberine’s mechanisms of action include inhibiting cancer cell growth, suppressing cancer metastasis, inducing apoptosis (cancer cell death), activating autophagy (cell cleanup of dysfunctional cells), regulating the gut microbiota, and improving the effects of anticancer drugs and other natural anticancer supplements. Berberine has also been found to have a synergistic effect when paired with curcumin (the active ingredient in turmeric), as well as several anticancer drugs.

This study published in Biomed Research International reported the synergetic anticancer activity of curcumin and berberine, inducing a cell death of more than 77%, compared to pure berberine, which was <45% and curcumin with <54% on average.

Other recent studies have shown that berberine can be used in combination with chemotherapy agents. Berberine seems to boost chemosensitivity, making the chemotherapy drugs more effective at lower doses, while reducing the unpleasant side effects of the chemotherapy.

Other Health and Longevity Benefits

Berberine also possess strong anti-inflammatory and antioxidant effects, fights depression, helps prevent or reverse fatty liver disease, reduces risk of heart failure, and fights harmful pathogens such as bacteria, viruses, parasites, and fungi. It is safe to say that berberine is a healthy longevity supplement with many different actions. These positive health effects are so powerful that scientists believe that berberine truly can add to a person’s healthy longevity.

Researchers are hard at work trying to isolate and study substances in berberine that make it such an effective and powerful natural longevity supplement.

How to Take Berberine

Many studies discuss dosages of berberine from 500mg to 2700mg daily. A usual dose is 500 mg, three times daily before meals.

Berberine has a short half-life lasting only a few hours, so it is critical to spread your dosage several times daily to attain steady blood levels.

In general, berberine has an excellent safety profile. The main side effects of berberine are some reports of constipation, cramping, diarrhea, flatulence, or stomach pain.

Berberine is not very bioavailable, but new forms of berberine are becoming available as berberine hydrocholoride or liposomal berberine to help its absorbability.

While berberine has been compared to metformin, the diabetes medication, berberine has health and longevity qualities far beyond what metformin is capable of, with its long list of lipid-lowering, blood sugar lowering, cancer-fighting, heart disease fighting, AMPK-activating actions. As a natural supplement, it also has far fewer negative side effects than metformin as well.

While it’s attractive to just take a pill that helps to increase longevity, don’t forget the massive health and longevity benefits of exercise for both your brain and body, the power of a good night’s sleep, the rejuvenating effects of getting outside, the relief of stress reduction and the importance of lowering inflammation.

Here’s to your health on your 100th birthday!

Mike Geary has been a Certified Nutrition Specialist and Certified Personal Trainer for over 15 years now. He has been studying nutrition and exercise for almost 25 years, ever since being a young teenager. Mike is originally from Pennsylvania, but has fallen in love with mountain life and now resides in the picturesque mountains of Utah. Mike is an avid adventurist and when he’s not spending his time skiing, mountain biking, hiking, or paddleboarding on the lake, he has enjoyed skydiving, whitewater rafting, piloting an Italian fighter plane (seriously), scuba diving, heli-skiing, and traveling all around the world, enjoying learning about different cultures. At the age of 40, Mike now feels healthier, stronger, and more energetic than when he was 20... All because of a healthy lifestyle and great nutrition!
Previous Natural Alternative Methods to Help Depression and Anxiety
Next Five Things that can Destroy Your Thyroid

10 Things You Can Do to Improve Arthritis