Sleep Deprivation: How it Affects Your Immune System to Fight Off Viruses 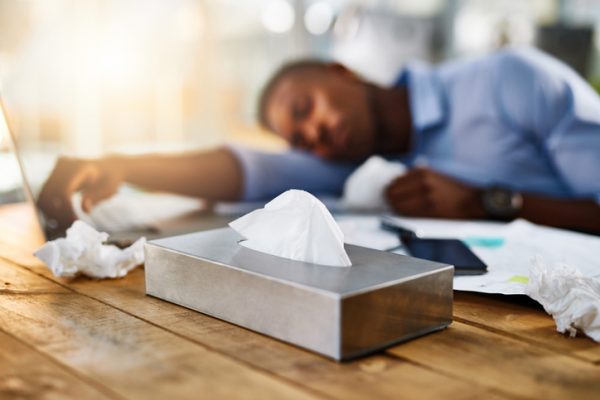 Back in the days when my kids were very young, one of them would occasionally come down with a cold or the flu. With three kids, it seemed like at least one of them would be sick fairly often. And when two or more kids were sick, there wasn’t a lot of sleeping for me.

I personally do not get sick very often—although after a few nights of being up with sick kids and missing out on valuable sleep–BOOM! I’d be sick too.

Now that my kiddos are all grown up, I travel frequently–and traveling to faraway places means a long flight, usually cramped up in a seat, trying to sleep while flying through several time zones. The sleep deprivation that results from a day’s worth (or more) of traveling and time zone changes almost always causes me to end up getting sick.

I’m convinced there has to be a big connection between sleep and immune function.

Turns out there is. People who generally sleep six hours or less have altered immune responses, in several different parts of the immune system. Sleep deprivation especially impacts the body’s white blood cells, which are part of the innate immune system, the body’s first line of defense against invading pathogens.

In one study of identical twins, conducted at University of Washington’s Sleep Center, it was found that the twin who got the least amount of sleep was more likely to get sick. Lead scientist in the study, Dr. Nathaniel Watson said, “What we show is that the immune system functions best when the body gets enough sleep. Seven or more hours of sleep is recommended for optimal health.”

Sleep is so essential to immune system function that sleep deprived people don’t even develop a very strong antibody response to a vaccine.

How does sleep affect your immune system?

The Innate Immune System, the Body’s First Line of Defense

Our immune system–while complex--has two basic functions. One is the innate immune system, which is our body’s first line of defense against any invading pathogens. Its purpose is to disable or kill any invader before it has a chance to enter our cells and reproduce.

Research shows that sleep deprivation has a strong negative effect on the innate immune system, which acts immediately to prevent the spread and movement of foreign pathogens.

The white blood cells and immune proteins that work as barriers to kill off infecting pathogens in the innate immune system are weakened by sleep deprivation.

T cells are a type of immune cell that fight against pathogens that make their way into a cell, such as virus-infected cells including Covid19, all types of influenza, HIV, herpes, and cancer cells.

When T cells recognize a pathogen or an infected target cell, such as a cell infected with a virus, they activate proteins that attach to their target and, in the case of a virally infected cell, kill it.

The researchers compared T cells from healthy volunteers who either slept or stayed awake all night. The T cells in the well-rested participants showed higher levels of activation than in the T cells of those who had not slept.

These findings show that sleep has the potential to enhance the efficiency of T cell responses, which is especially important considering that sleep disorders are also tied to mental health conditions such as depression, chronic stress, and aging.

During sleep, your immune system also releases proteins called cytokines, some of which help promote sleep. Certain cytokines also play a role when you have an infection or inflammation, or when you’re under stress.

Cytokines are actually a set of proteins that serve as chemical messengers. These proteins, tell immune cells what to do and also tell the body to produce more of them to help deliver a knockout blow, if necessary, to the infection.

Sleep deprivation has been shown to decrease the production of these protective cytokines. In addition, infection-fighting antibodies and cells are reduced during periods when you don’t get enough sleep.

Sleep also helps reduce stress hormones while raising helpful sleep hormones such as melatonin. Melatonin is a hormone made naturally by your body and produced in the pineal gland in the brain.

Melatonin is considered the sleep hormone as its rising levels at night help you fall asleep and sleep more soundly. Melatonin is also a powerful antioxidant, which may provide a variety of other health benefits, including strengthening the immune system.

Cytokines can be pro-inflammatory, increasing an inflammatory response from the immune system. Other inflammatory cytokines also increase with shorter sleep periods, and one in particular, IL-17 can remain elevated up to two days after recovery sleep.

In severe cases of the flu or Covid19, cytokine production can grow out of control. Immune cells release cytokines that tell the body to produce more immune cells, and in turn these new cells release even more pro-inflammatory cytokines.

These excessive amounts of cytokines can lead to something called a cytokine storm, which creates an overwhelming inflammatory immune response that can damage lungs and kidneys and bring about death. Cytokine storms are one of the reason that many people die from Covid19.

Sleep can help to modulate–or slow down–the effects of an over-reaction of cytokines while protecting and balancing the immune system. Sleep also helps to lower inflammation, including CRP levels (an inflammatory marker), while strengthening the overall immune response.

Adults should have a minimum of seven hours of sleep on a regular basis for improved health, lower stress levels and lower inflammation. A good night’s sleep also goes a long ways towards protecting your health and effectively fighting off dangerous pathogens such as Covid19, flu and even colds.

Unfortunately, more one third of American adults are getting less than seven hours of sleep, according to a study in 2016 from the Centers for Disease Control and Prevention.

If necessary, take a healthy natural supplement containing natural melatonin to help you get sleepy and sleep more soundly, as well as giving a try to this delicious HOT golden latte. Drink right before bed, if you struggle with “winding down” and relaxing at the end of the day, or falling asleep at night.

Not only will it help you relax and fall asleep, but it’ll help you STAY asleep, providing for a more restful night, and let you wake up feeling refreshed, rejuvenated, and full of energy

Take 1 sip an hour before bed to boost your Growth Hormone and flatten your belly while you sleep:

Recent studies are now showing how a simple tweak to your bedtime ritual can have dramatic effects in shrinking fat tissue while reversing the signs of premature biological aging every time you fall asleep.

This pre-bedtime daily ritual also helps you sleep deeper while increasing specific hormones that FORCE your body to release stored abdominal fat while you sleep… AND it works equally well for BOTH men and women, as you’ll see below…

Mike Geary has been a Certified Nutrition Specialist and Certified Personal Trainer for over 15 years now. He has been studying nutrition and exercise for almost 25 years, ever since being a young teenager. Mike is originally from Pennsylvania, but has fallen in love with mountain life and now resides in the picturesque mountains of Utah. Mike is an avid adventurist and when he’s not spending his time skiing, mountain biking, hiking, or paddleboarding on the lake, he has enjoyed skydiving, whitewater rafting, piloting an Italian fighter plane (seriously), scuba diving, heli-skiing, and traveling all around the world, enjoying learning about different cultures. At the age of 40, Mike now feels healthier, stronger, and more energetic than when he was 20... All because of a healthy lifestyle and great nutrition!
Previous 11 Strange Signs That Your Liver Is In Trouble
Next Walking VS Running