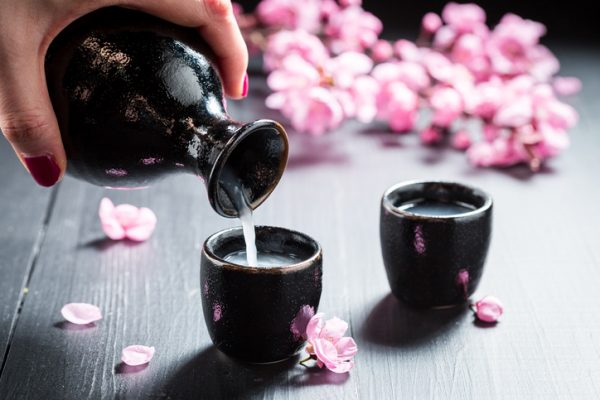 I’ve always been a wine drinker, but lately I’ve been attracted to Sake.

I like sake for its light, clean, smooth flavor, and the way it pairs so well with many foods. We hear often about the health benefits of wine, but do you ever hear much about sake?

Let’s take a closer look at sake first. The Japanese have a saying about sake, “Nihonshu wa ryori wo erabanai”. This means that, “Sake doesn’t fight with food.” Sake is a smooth and somewhat neutral backdrop for all kinds of cuisines and many styles of cooking—not just sushi.

Sake is not just rice wine. Sake is brewed from four basic ingredients: rice, water, yeast, and koji–a type of mold that helps in the fermentation process. Sake, is basically an alcohol drink made from fermented rice.

Sake rice—especially for premium sake, is milled to a high degree of purity, making premium sake virtually hangover-free! In Japan, the saying goes, “You know good sake the next morning.”

Wine on the other hand, is made from fruit juice, which turns to sugar, and then ferments and creates alcohol. If you tend to avoid wine because of the histamines, sulfites, and tannins, definitely try sake. It’s much cleaner and more pure and far less likely to produce a hangover.

Sake usually contains around 15 to 16 percent alcohol, while grape wine can be anywhere from 9 to 15 percent.

Both wine and sake pair well with particular foods. Contrary to what many believe, sake goes with many more dishes than just sushi. Since sake is light colored and has a smooth neutral flavor, it works better with chicken or fish, but there are quite a few varieties of sake, so knowing and understanding how their taste pairs with particular dishes is important.

The amino acid content in sake makes it very well suited to main dishes, as the amino acids heighten the umami (savory flavors).

Wine, as you know, comes in red, rose, and white–and in many different types, so that each can be paired to particular foods like beef, chicken, or fish. A lot depends on the taste, however and knowing whether wine is sweet, dry, tangy, or rich and earthy makes a big difference.

Both sake and wine can have a wide variety of flavors, depending on the regional varieties of the grapes or rice. For sake, it also comes down to the milling process and the purity of the sake production.

In general sake may be slightly higher in calories, but it contains less sugar and more alcohol. This would mean that there should be a tendency to drink less of it—making the caloric difference a wash. It’s difficult to compare sake calories to wine since there is a wide variation in sugar content and alcohol content. It’s a little like comparing apples to oranges. As far as sugar and carbs go, sake wins.

Wine does have some health benefits, but many of the health benefits of wine come from red wine. Red wine contains polyphenol antioxidants, primarily resveratrol, which comes from the skin of the grapes.

Resveratrol is considered an anti-inflammatory substance that seems to help protect the blood vessels and lower inflammation in the heart. It is also thought to slow down aging. However, studies on resveratrol are mixed, and many studies have pointed out that a large quantity of wine would have to be consumed to receive the health benefits of the resveratrol. At that point, the negative health aspects of the alcohol would cancel out the benefits.

While sake does not contain resveratrol, sake does contain a unique blend of amino acids. Sake is known to contain about 20 different amino acids—which is more than that of red wine. This quantity and type of amino acids is where some of the health benefits of sake are.

Another popular reason to drink sake is the fact that it contains far less acid than wine. In fact sake contains about 1/3 as much, making it easier on the stomach and less likely to produce heartburn and reflux.

In response to these results, the Japan National Cancer Research Institute conducted a 16-year study of its own. They picked 265,000 healthy adults from all over Japan to monitor the risk of cancer during that period. Those who drank sake moderately on a daily basis had a lower risk of cancer than then non-sake drinkers. [published studies are difficult to locate in google, since these studies are generally published in Japanese.]

When choosing sake, it’s helpful to understand the different types and what they mean. The cheaper sakes are the ones that are often served warm, while the better premium sakes are served chilled.

As a rule of thumb, the more the rice grain is milled or polished away, the more smooth, light, and refined the sake taste. This is how most sake is priced. Sake with less polished rice produces a sake that has a bold, robust flavor.

The purest rice style of sake is called Junmai. The less milled and lesser quality types are called Junmai Daiginjo, or Junmai Ginjo. This has to do with how much of the rice grain is milled off. The highest quality style is just called Junmai. My favorite is Junmai sake which can be found at prices similar to affordable wine.

There are also some alcohol-added sakes with the names correlating to the milling process as well. The lowest quality of these is Daiginjo, then Ginjo, and Honjozo. One sake with no milling requirements is called Futsu-Shu.

For me, the clear winner is sake!

Serve high-quality sake chilled in your favorite wine glass or beverage glass instead of the small ceramic cups which are meant for the lower quality table sake which is served warm. “Kanpai” (Cheers!) as the Japanese say!

Mike Geary has been a Certified Nutrition Specialist and Certified Personal Trainer for over 15 years now. He has been studying nutrition and exercise for almost 25 years, ever since being a young teenager. Mike is originally from Pennsylvania, but has fallen in love with mountain life and now resides in the picturesque mountains of Utah. Mike is an avid adventurist and when he’s not spending his time skiing, mountain biking, hiking, or paddleboarding on the lake, he has enjoyed skydiving, whitewater rafting, piloting an Italian fighter plane (seriously), scuba diving, heli-skiing, and traveling all around the world, enjoying learning about different cultures. At the age of 40, Mike now feels healthier, stronger, and more energetic than when he was 20... All because of a healthy lifestyle and great nutrition!
Previous Hydrogen Peroxide For Teeth Whitening, Hair And More
Next 10 Things You Can Do to Improve Arthritis